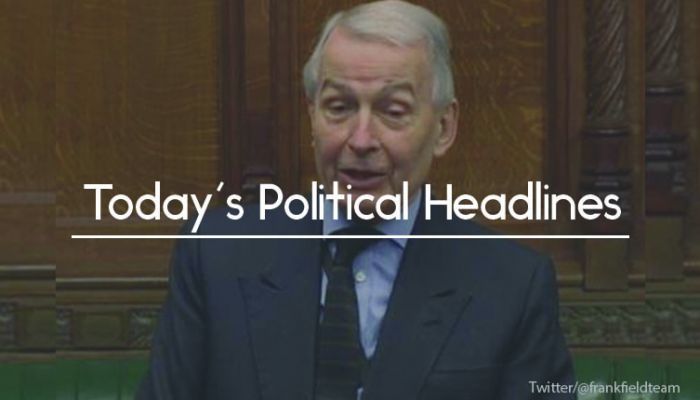 Frank Field resigns the Labour Whip
The BBC reports that the Labour MP for Birkenhead Frank Field has resigned the Labour whip. Field said that the party is becoming a force for anti-Semitism in British politics and said a culture of intolerance and nastiness exists in local parties. A month ago, Field lost a confidence vote in his local party after voting with the Government in a vote relating to Brexit. Field criticised the Labour leadership in his resignation letter saying they are doing nothing to address anti-Semitism in the party.

Poland offers Brexit support
The Guardian reports that the Government of Poland will make an attempt to persuade the EU to become more open to the UK’s Brexit plans, this comes as Foreign Secretary Jeremy Hunt said he has not seen any progress on the Chequers proposal from Brussels. The Polish Foreign Minister has said Poland wants to maintain their relationship with the UK after Brexit.

Davidson considering Westminster role
The Sun has revealed that leader of the Scottish Conservatives, Ruth Davidson, may move south of the border to Westminster, abandoning her role as an MSP to take up a ministerial position. The move is allegedly the first step towards a potential Tory leadership bid, with Davidson moving into Government via a peerage and a place in the House of Lords.

Wonga goes into administration
The Guardian is reporting on the collapse of payday lender Wonga, which went into administration yesterday. The downfall follows a sharp increase in compensation claims against the lender, each of which allegedly cost the company £550 to deal with. The Financial Conduct Authority has told roughly 200,000 customers who still owe over £400m to continue repaying their loans.

Raab heads to Brussels for Brexit talks
The Express looks ahead to Brexit Secretary Dominic Raab preparing for six hours of talks with Michel Barnier. It is expecting issues such as the Irish border to be discussed. This comes after Raab recently admitted that a deal may not be reached by October. The extended session is perhaps an indication of the desire of both sides to come to a deal as soon as possible.

Sturgeon praised for handling of Salmond case
The Guardian are reporting on the support given to SNP leader Nicola Sturgeon from senior SNP politicians, praising her handling of harassment allegations against former First Minister Alex Salmond. Senior SNP figures including Westminster leader Ian Blackford have backed Sturgeon. The move comes after a crowdfunding appeal launched by Salmond reached £90,000, which he said would be used to cover his legal fees for taking the SNP Government to court.

Who’s in and who’s out? Vuelio Political Services track all the moves and changes in UK politics, at Westminster and beyond.