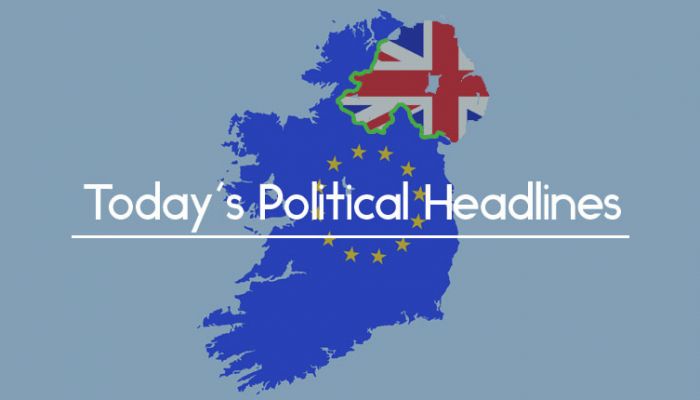 EU rejects UK’s border proposals, while three Conservative MPs back customs union
The Daily Telegraph reports that the EU has rejected the UK’s proposals for avoiding a hard border in Northern Ireland, in what a source called a ‘systematic and forensic annihilation’. The paper says that the Prime Minister may now have no choice but to stay in a customs union with the EU if she wants to avoid a hard border in Northern Ireland. The EU has also suspended its internal discussion on the EU-UK trade deal, pending a resolution to the ‘impasse’, while Theresa May is to hold weekly meetings of her Brexit ‘war cabinet’. The Guardian says that three Conservative select committee chairs have signed a motion urging the Government to remain in a customs union with the EU.

Cabinet split over post-Brexit immigration policy delays
The Times claims that the Cabinet is split over delays to the country’s post-Brexit immigration policy, with Home Secretary Amber Rudd being urged to speed up the bill by Brexit-supporting ministers. The bill is currently scheduled to be introduced early next year and Brexiteers are concerned that it has been delayed so that preferential access for EU workers can be part of the Brexit negotiations.

Union chief accuses Rudd of blaming staff over Windrush scandal
The Guardian says that Dave Penman, general secretary of the FDA union has accused Amber Rudd of blaming civil service staff for the Windrush scandal in an attempt to deflect from the Government’s hostile policies, a claim which has been backed by Nick Clegg. The paper adds that official accounts appear to contradict the claim of Theresa May’s former advisor Nick Timothy that May attempted to block the controversial ‘go home’ vans.

Brexit bill still uncertain according to NAO
The BBC reports that a National Audit Office report has found that the total cost of the Brexit ‘divorce’ bill is still uncertain. It said that the Government’s figure of £35-39bn was a ‘reasonable estimate’ but that it could increase or decrease as a result of ‘relatively small changes’ to things such as inflation, the exchange rate and the UK’s economic performance.

McDonnell says Labour less of a threat to the City than the Conservatives
The Financial Times carries details of a speech by Shadow Chancellor John McDonnell yesterday, in which he told the City of London that the Conservatives’ ‘mishandled Brexit’ posed more of a threat than Labour’s plans for higher taxes and more intervention in business. He told City executives that they would have ‘a seat at the policymaking table’.

Cable calls for tech firms to be broken up
The Guardian reports on a speech by Sir Vince Cable, leader of the Liberal Democrats. He called for the large tech firms, such as Google, Amazon and Facebook, to be broken up. He suggested that the EU was better placed to do this than national governments and that it was worth considering whether the public should be paid for the use of their data.

We have a dedicated political team, which creates bespoke reports. Find out more about Vuelio political services.