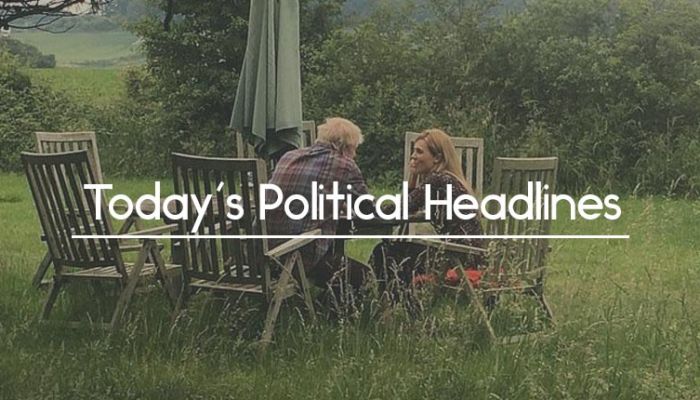 Johnson defends right to privacy as donor demands explanation
The Daily Telegraph says that Boris Johnson has defended his right to privacy saying that it was ‘unfair’ to drag his ‘loved ones’ into things, but has been accused of hypocrisy after photos of him holding hands with his girlfriend were passed to the press. He used a BBC interview last night to relaunch his campaign for the leadership and will attend a series of events in Surrey and South London today, after criticism from a number of sources including leading party donor John Griffin, who said that members ‘deserve an explanation’.

Hunt promises £15bn defence spending
The Times reports that Jeremy Hunt is to announce that he will increase defence spending by £15bn if he becomes Prime Minister, ensuring that it reaches 2.5% of GDP in the next five years. However, he has not given a detailed explanation of how this will be funded. The money would be used to increase the UK’s presence in the North Atlantic and Indo-Pacific regions and to expand the UK’s cyber-security defences.

Labour MPs given a fortnight to decide if they want to stand again
The Guardian reports that the Labour Party has given its MPs a fortnight to decide if they wish to stand again at the next general election. Following a rule change last year, those who wish to restand will need to secure the support of two-thirds of local branches and local trade union branches; if they don’t, they can be challenged by other candidates.

Johnson tax cuts could cost £20bn and would mostly benefit the rich
The Financial Times carries details of new analysis by the Institute for Fiscal Studies, which says that Boris Johnson’s proposed tax cuts could cost up to £20bn a year and would mostly benefit richer households. Tom Waters from the thinktank said it was ‘not clear that spending such sums on tax cuts is compatible with both ending austerity in public spending and prudent management of the public finances’.

Top jobs disproportionately held by private school pupils
The Guardian says that a new study by the Sutton Trust and the Social Mobility Commission shows that members of the UK’s elite, who hold top jobs in politics, the judiciary, the media and business are five times more likely to have attended a private school than the population as a whole. Shadow Education Secretary Angela Rayner said that Labour would give ‘every child the chance to flourish, not just a lucky few’.

Ireland under pressure from other EU countries over no-deal Brexit plans
The Daily Telegraph claims that Ireland is coming under pressure from six other EU countries, including France and Germany, to detail how it would manage a no-deal Brexit as they are concerned that this may now be unavoidable. The countries are said to fear that Ireland could pose a threat to the integrity of the single market.

May to make everyone eligible for sick pay
The Sun reports that Theresa May is to announce that sick pay will be extended to everyone. Companies that treat their staff well will be given a ‘conditional rebate’. The measure forms part of May’s attempt to establish a legacy, with the Government also considering higher accessibility standards for new homes and increased support for disability benefit recipients.

Davies reselected despite recall petition
The Times reports that the Conservatives have selected Chris Davies as their candidate for the Brecon and Radnorshire by-election, despite it having been caused by a recall petition triggered after he admitted submitting two false expenses invoices. He said that he was ‘the right person’, despite almost one in five constituents having backed the petition.

Don’t miss a thing in the world of politics, get Vuelio Political Services.