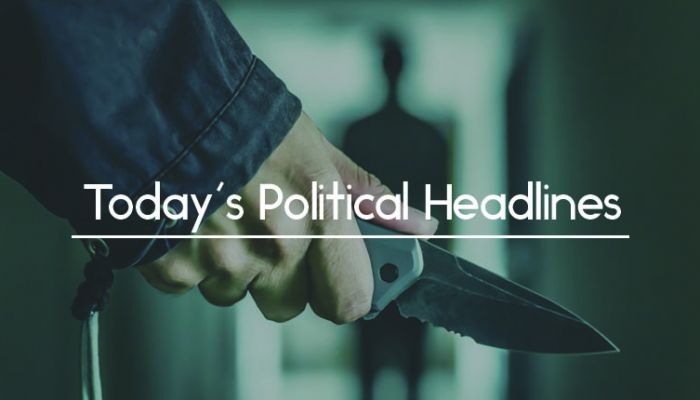 Knife crime to be treated like a disease
The Daily Mail reports that Theresa May and Home Secretary Sajid Javid are to announce a new ‘public health’ approach to knife crime at a youth crime summit today. Schools, hospitals and social services will be given a legal duty to report knife wounds so that children can be referred to violence reduction units. Writing in the paper, they vow to ‘treat the threat which knives pose to our society like a disease.’

Ministers warn of resignations over soft Brexit
The Times says that ministers, including Chris Grayling and Penny Mordaunt, have warned Theresa May that they might resign if she agrees to a ‘soft’ Brexit this week. However, yesterday Justice Secretary David Gauke said that Conservative MPs needed to recognise that they didn’t have the votes for their favoured Brexit. The paper adds that some ministers have suggested that May should attempt a ‘fudge’ by agreeing a ‘customs partnership’ with the EU – a proposal previously rejected by both the Cabinet and the EU.

Grayling says next Prime Minister needs experience
Interviewed by The Daily Telegraph, Transport Secretary Chris Grayling has suggested that the next Prime Minister should be an experienced Brexiteer because ‘the next two or three years are going to be very tough’. He added that they may not be the same person who the party would want as a leader in the 2027 general election, so it would then be time to turn to one of the ‘really good generation of younger politicians in their 40s’.

Corbyn says he’s ready for an election
Speaking to the Daily Mirror, Labour leader Jeremy Corbyn says that his party is ‘ready for a general election’ and to deliver its ‘alternative Brexit plan’, though he added that it ‘must be about the future of our country, not just Brexit’. He said that he took ‘nothing for granted’ but an election ‘would be the chance to change politics in a fundamental way.’

Customs union may win indicative votes
The Times suggests that a customs union with the EU could emerge as the victor from today’s indicative votes on Brexit options after Shadow Foreign Secretary Emily Thornberry hinted yesterday that the party would be unable to back the ‘Common Market 2.0’ plan as it would continue freedom of movement.

SNP close to backing single market plan
According to The Sun, the Tory rebels backing the Norway-style ‘Common Market 2.0’ proposal are close to securing the support of the SNP for their plan. The SNP abstained on the proposal last week, but their support today could potentially give it more votes than the rival customs union plan.

Chief Whip says Government should have been clearer about ‘softer Brexit’
Chief Whip Julian Smith told the BBC that the Government ‘should have just been clearer’ that the general election result in 2017 ‘inevitably’ led to a softer Brexit. Interviewed for a new documentary, he said that the Cabinet’s behaviour was the ‘worst example of ill-discipline in Cabinet in British political history’.

Windrush compensation to be announced
In an exclusive, The Sun says that Home Secretary Sajid Javid is now ready to announce details of the compensation scheme for victims of the Windrush scandal. The Chancellor has agreed to give the Home Office £100m for the scheme, which may be launched this week, with officials suggesting that at least 15,000 people may be entitled to compensation.

Every issue – Brexit or otherwise – can be covered for you by Vuelio Political Services.