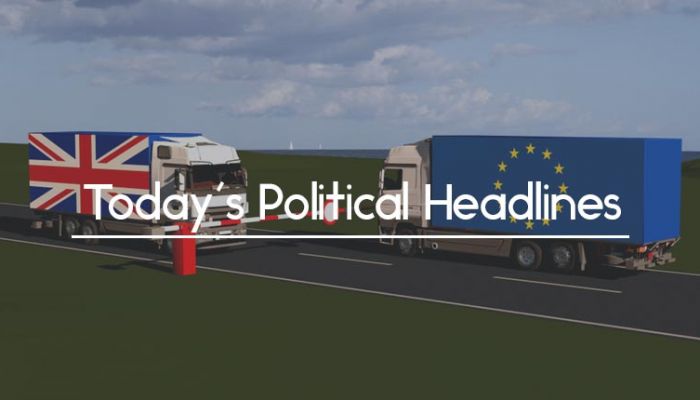 Today’s political headlines include May seeking changes to the backstop, Rudd warning that 40 ministers may quit to prevent no-deal, Labour tables an amendment for a second referendum and Robbins casts doubt on Brexit plan.

May to seek changes to backstop, as MPs put forward alternative plans
The BBC reports that Theresa May used her statement yesterday to say that she was going to seek changes to the Irish backstop from the EU, and axed the £65 fee that EU citizens were to be charged to remain in the country. Labour has tabled an amendment calling for MPs to vote on Brexit options, and on a further referendum. Both Rachel Reeves and Yvette Cooper have put forward plans to extend the Article 50 negotiating period, while Hilary Benn has tabled an amendment calling for a non-binding vote on different options.

Rudd warns that 40 ministers may quit to prevent no-deal Brexit
The Times claims that Amber Rudd, the Work and Pensions Secretary, has demanded that Theresa May gives all Conservative MPs a free vote on extending Article 50 and stopping a no-deal Brexit, otherwise up to 40 ministers will resign. Business minister Richard Harrington has confirmed that he will quit if a no-deal Brexit is pursued, while culture minister Margot James and defence minister Tobias Ellwood are apparently also considering their position.

Labour tables amendment calling for vote on a second referendum
The Guardian reports that Labour has tabled a compromise amendment calling for MPs to vote on holding a second referendum, although it does not commit the party to supporting it. Labour’s alternative Brexit plan has been criticised by the People’s Vote campaign for having ‘little regard for what could actually be delivered’ because it proposes the UK staying in a customs union in a strong relationship with the single market.

Robbins uses text to Chancellor to cast doubt on Brexit plan
The Daily Telegraph claims that Oliver Robbins, the chief Brexit negotiator, texted Chancellor Philip Hammond during a Cabinet conference call to warn that the idea of renegotiating the backstop was ‘for the birds’. According to the paper, a Government source confirmed that a text had been sent, but claimed the content had been ‘misrepresented’.

Second referendum amendment could be tabled today
The Sun reports that pro-EU MPs may table an amendment calling for a second referendum today. Conservative Dr Sarah Wollaston is in talks with MPs from other parties about the ‘Doctor’s Amendment’, so called because other signatories will include her fellow Tory Dr Philip Lee, Dr Paul Williams from Labour and Dr Philippa Whitford from the SNP.

Barnier tells May not to focus on the backstop
The Guardian reports that the EU’s Brexit negotiator, Michel Barnier, has called on Theresa May to move away from renegotiating the backstop, saying that to secure support in Parliament she needed to focus ‘much more on the future relationship between the EU and the UK’, adding that the EU was ‘ready to work again on the political declaration’.

MPs call for register of online trolls
The Daily Telegraph says that the Commons Petitions Committee has called for trolls who were convicted of online abuse to be listed on a government register, claiming that current legislation is ‘not fit for purpose’ and media firms had failed to self-regulate. The committee was responding to a petition from over 220,000 people put forward by Katie Price, whose disable son has been subjected to online trolling.

Osamor used House of Commons notepaper to beg for son to avoid jail
The Times reports that Labour MP Kate Osamor may face a parliamentary inquiry after it emerged that she had written to a judge on House of Commons notepaper begging for her ‘beautiful son’, who works as her chief of staff, to be spared jail after he was convicted of possessing drugs with intent to supply.

What matters to you in politics? Whatever it is, Vuelio Political Services covers it.