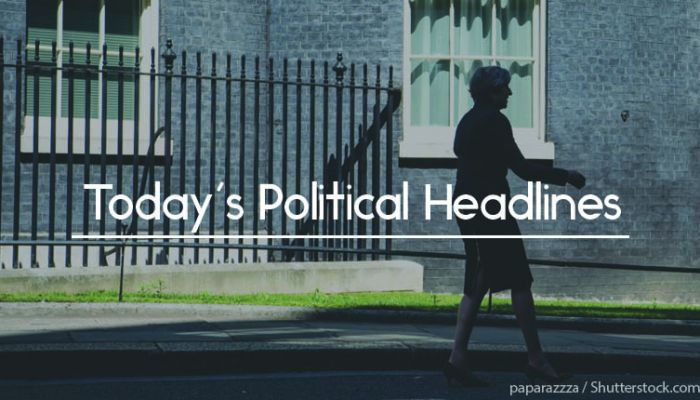 May would fight Boris Johnson leadership bid
The Guardian reports that Prime Minister Theresa May has said she would fight any leadership bid from Boris Johnson and she is planning to take the Conservatives into the next general election. She signalled her intention to deliver for the country despite the unhappiness at her Chequers deal. May also stated her intention to address the big issues at the upcoming Conservative Party conference, specifically mentioning her ambition to tackle housing.

Pro-EU Tories fear entryism from UKIP voters
The Times are reporting that pro-EU Conservative MPs are seeing an increase in applications to join their local parties, leading to concerns that UKIP voters are seeking to unseat them in favour of pro-Brexit candidates. This comes after key Leave.EU donor Arron Banks called for members of the Brexit campaign group to join the Conservatives and help select candidates sympathetic to Brexit.

Former chief Rabbi says reported Corbyn remarks most offensive since Enoch Powell
The New Statesman has an interview with the former Chief Rabbi, Jonathan Sacks, who says reported remarks made by Jeremy Corbyn on ‘Zionists’ are the most offensive remarks by a senior politician since Enoch Powell’s rivers of blood speech. Sacks called the remarks hateful, divisive and undermining to an entire group of British citizens. Sacks was also asked about Israel’s new nationality law, he said he is not a legal expert but as far as he understands it, there is nothing apartheid about it.

Crackdown on illegal and unsafe migration as part of attempts to tackle modern slavery
The Express reports that Theresa May will announce further measures on modern slavery today. A partnership with Nigeria will see the two nations work together to combat modern slavery. The plans will see support given to victims of modern slavery returning to Nigeria, this support will consist of counselling to deal with their distress and training to get them into jobs.

Scrap tax relief for entrepreneurs, says thinktank
The Guardian are reporting on research carried out by the Resolution Foundation, which has urged Chancellor Philip Hammond to abolish entrepreneur’s relief in the autumn budget. In a report released today, the thinktank has claimed scrapping the tax break would save roughly £2.7bn, which could then be spent on the NHS.

If there’s a leadership bid, some political stories move out the spotlight. Keep up to date with everything that matters to you with Vuelio Political Services.