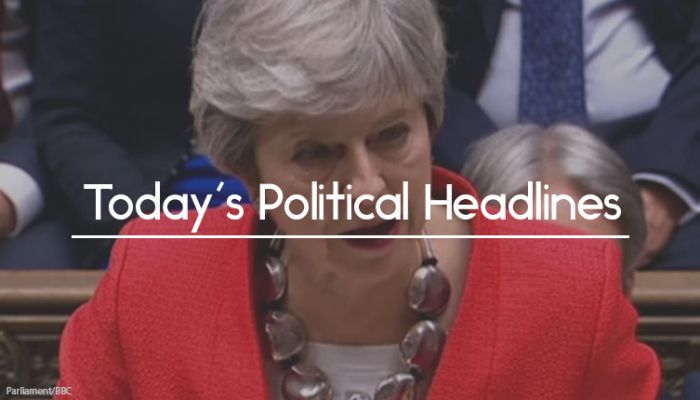 May’s deal rejected again, as MPs prepare to vote on ruling-out no-deal Brexit
As the BBC reports, last night MPs rejected Theresa May’s Brexit deal, this time by 391 votes to 242, and so they will now get to vote on a motion to reject a no-deal Brexit tonight, which the Government is allowing its MPs a free vote on. Labour leader Jeremy Corbyn said that the defeat showed that a general election should be called, but failed to mention the possibility of a second referendum. The Times says that there is speculation that a delegation of senior Conservatives may ask May to resign this week, and that the Government is facing attempts by Yvette Cooper to give Parliament control of the Brexit timetable and from backers of the ‘Malthouse plan’ to secure an extended transition prior to leaving the EU without a deal.

Government announces no-deal Brexit tariff cuts
The Financial Times reports that the Government has this morning set out its plans for tariffs in the event of a no-deal Brexit. They would be lifted on 87% of imports, with the sectors to which they would still imply including some food products, finished vehicles, ceramics, fertiliser and fuel. There would also be no checks or customs declarations at the Irish border, but new checks to protect biosecurity would take place away from the border.

EU to put no-deal Brexit ‘back on the table’
The Times says that the EU is to ‘put a no-deal Brexit back on the table’, even if MPs vote against it tonight because member states are frustrated with the political chaos in the UK and some are tempted by the ‘clean break’, avoiding adding extra uncertainty and cost for firms which have already prepared for a no-deal Brexit on 29 March. Jean-Claude Juncker, European Commission President, said that no new concessions would be made.

Ministers worried about no-deal plans to remove police from cities
According to The Guardian, Government ministers have expressed concerns about no-deal Brexit plans which will see police officers removed from cities in order to deal with transport problems affecting Kentish ports. A ‘cabinet source’ told the paper that they couldn’t ‘believe we are planning to take officers off the street at a time knife crime is rising’.

Hammond to announce new knife crime funding
In an exclusive, The Sun reports that Chancellor Philip Hammond will use today’s Spring Statement to announce £100m of funding to tackle knife crime. The paper describes this as a ‘victory’ for Home Secretary Sajid Javid, adding that it will be spent on violent crime units in the seven worst-affected cities

Government to consult on how to fund infrastructure
The Financial Times reports Hammond will launch a consultation into new ways to fund infrastructure projects in the Spring Statement. He used last year’s Budget to abolish the private finance initiative, which he said failed to deliver value for money. The plan has been described as an attempt to show the Government is thinking about issues beyond Brexit.

Tech firms face new regulations
The Sun says that Hammond will use the Spring Statement to announce regulation of tech firms such as Facebook and Google to stop them ‘accumulating too much power’, promising to examine measures which would allow users to transfer their data to other platforms.

Government urged to help Syrian fighters’ families
The Guardian says that the Government is facing calls to help the families of British foreign fighters in Syria stranded in a refugee camp, by giving them access to cash transfers, aid, and advice on returning to the UK from British-funded aid agencies. According to the paper the number of wives of British foreign fighters in the camp is higher than forecast.

Stay in the loop with Vuelio Political Services.