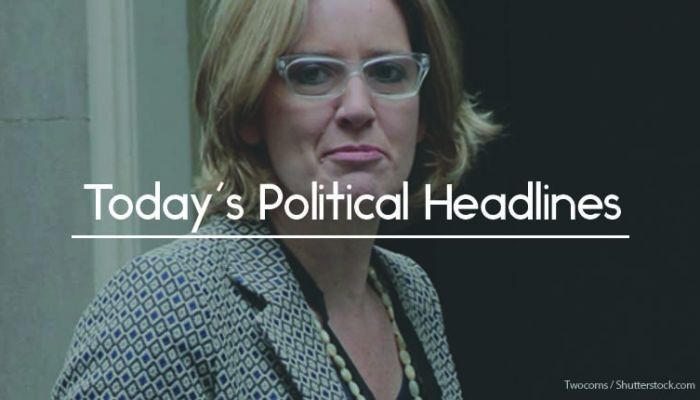 Today’s Political Headlines include Rudd accused of muddying the Brexit waters, the Committee report criticising rail franchising, May warned to abandon customs plans and Gove stands down in shock collar row. Oh, and Trump is visiting.

Rudd accused of widening tensions over Brexit and abandons immigration targets
The Times says that Amber Rudd has been accused of deliberately widening Conservative tensions over Brexit by saying that she was ‘not going to be drawn’ over whether the UK would stay in a customs union with the EU. It also reports that she has promised to end immigration removal targets, having previously denied their existence, and that new statistics show that knife crime has increased 22% in the last year.

Committee report heavily criticises rail franchising
The Guardian carries details of a report on rail franchising by the Commons Public Accounts Committee. The report finds that the current system is broken, with passengers carrying the cost. It accuses the Government of ‘completely inadequate’ management of two franchises, of failing to learn from its mistakes, and of being too ambitious. The Government has described the report as imbalanced and disappointing.

May warned to abandon Brexit customs plans
The Times claims that Theresa May has been warned to abandon her plans for a ‘blue skies’ customs deal with the EU after both remain and leave supporting Conservative MPs rejected it, with ‘senior Government figures’ expecting the plan to be dropped before a cabinet meeting on Wednesday. The Financial Times says that the EU’s chief negotiator, Michel Barnier, told a financial conference that claims that ‘the EU desperately needs the City of London’ were false. The Daily Telegraph reports that Scottish Conservative leader Ruth Davidson has accused Nicola Sturgeon of rejecting the Governments EU (Withdrawal) Bill for ‘nationalist’ reasons.

Gove stands down in shock collar row
The Times reports that Michael Gove has stood down in a row over shock collars for pets, limiting proposals for a ban to those used to train animals as opposed to those used to contain them. The move was confirmed in what the paper calls ‘a carefully scripted exchange’ with former Conservative minister John Hayes.

New poll puts Labour on 51% in London
The Sun reports on a new poll, showing that Labour has the support of 51% of voters in London ahead of the local elections next week, compared to 29% for the Conservatives. The paper warns that this would mean that Labour would not gain control of Wandsworth and Westminster councils, with its support having dropped 3% since February.

Starmer attacks Len McCluskey in antisemitism row
The Times says that Sir Keir Starmer has attacked Len McCluskey, after the general-secretary of Unite accused ‘Cobyn-hater’ Labour MPs of presenting the party as a ‘morass of misogyny, antisemitism and bullying’. However, Starmer said that the party’s antisemitism problem was ‘obvious’ and those who denied it were ‘part of the problem’.

Ruth Davidson announces pregnancy
As the BBC reports, Scottish Conservative leader Ruth Davidson has announced that she is three months pregnant. She and her partner Jen Wilson are expecting their first child in October, following IVF, and she has confirmed that she will be taking some time off for maternity leave.

Date for Trump visit set
The BBC reports that President Trump is to visit the UK on Friday 13 July, after previously cancelling a trip. It will not be a state visit, although the BBC understands that an invitation for one still stands. He will hold talks with Theresa May and is likely to meet the Queen.

Vuelio political services are responsible for the headlines.