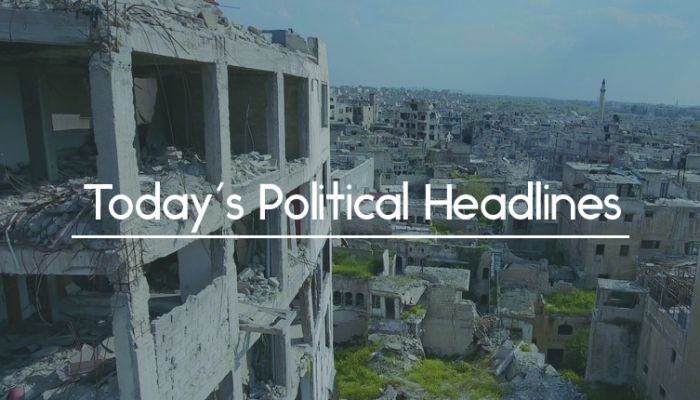 Cabinet agrees military action in Syria is needed
The BBC reports that the Cabinet has agreed ‘on the need to take action’ in Syria in order to prevent the further use of chemical weapons. No details of any UK military involvement in Syria had been given by the Government, and MPs from both the Conservative Party and opposition parties have called for a vote in Parliament before any action is taken.

Jeremy Hunt admits breaking money laundering rules
In an exclusive, The Daily Telegraph reports that Jeremy Hunt has admitted breaching the Government’s anti-money laundering legislation when he set up a company to buy seven luxury flats, as he didn’t declare his 50% interest in the firm. The Cabinet Office found that he did not breach the Ministerial Code of Conduct, but he could still be investigated by a House of Commons committee.

Emily Thornberry says UK should apologise to ex-colonies
According to The Times, Shadow Foreign Secretary Emily Thornberry has called on the Government to use the upcoming meeting of the Commonwealth to apologise for Britain’s past mistakes, including over the Chagos Islanders and apartheid. The paper adds that Shadow International Development Secretary Kate Osamor has said that Prince Charles is not suitable to succeed the Queen as Head of the Commonwealth.

Penny Mordaunt describes UK Aid as shield
The Guardian says that International Development Secretary Penny Mordaunt described UK Aid as a ‘shield’ against pandemics, poverty, organised crime and terrorism in a speech yesterday. However, the paper adds that the speech was ‘short on detail, but long on colour and allusion’ and a planned question and answer session was cancelled.

OPCW confirms nerve agent analysis
The BBC says that the Organisation for the Prohibition of Chemical Weapons has confirmed the UK’s analysis of the type of nerve agent used in the Salisbury poisoning. Russia has called the allegations an ‘anti-Russian campaign’ but Foreign Secretary Boris Johnson said there was ‘no alternative explanation’ and ‘only Russia has the means, motive and record’.

Arlene Foster gives evidence to RHI inquiry
As The Guardian reports, giving evidence to the inquiry into the renewable heat incentive, Arlene Foster said that she deeply regretted its spiralling costs. However, she also claimed that Sinn Fein’s protests over the scheme had been a pretext to bring down the executive.

Councils run down financial reserves as funding is cut and costs increase
The Financial Times reports that almost half of councils in England have run down their financial reserves over the last two years, as they struggle with cuts in funding from central government and increases in social care costs. The councils whose reserves have increased are largely small district councils which do not handle social care.

Norman Lamb suffers stroke due to long working days
The Sun says that the Liberal Democrat MP Norman Lamb suffered a stroke a fortnight ago, which he has attributed to long hours and a lack of sleep. He now plans to make changes and ‘work smarter’, saying that he was lucky not have received any lasting damage.

These headlines were curated by Vuelio political services.