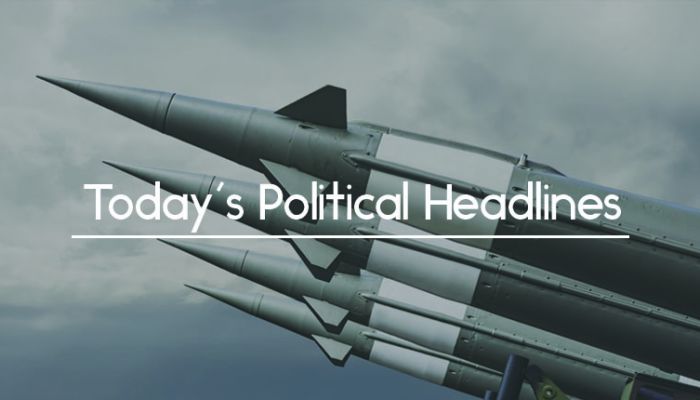 May summons cabinet to decide Syria response
The BBC says that Theresa May has summoned the cabinet to discuss the UK’s response to the suspected chemical weapon attack in Syria, with the Government considering backing military action threatened by the USA and allies. It adds that Jeremy Corbyn has called for Parliament to have a say in the decision and warned about the risk of a ‘hot war between the US and Russia over the skies of Syria’. The Daily Telegraph reports that Theresa May has order British submarines to move within missile range of Syria with strikes potentially beginning tonight, subject to ministerial approval.

Labour pledges free bus travel for under-25s
The Guardian reports that the Labour Party has promised to introduce free bus travel for under-25s, paid for by ring-fencing road tax. The funds would be given to councils who moved to introduce public ownership of bus services or franchising, incentivising councils to create municipally-owned bus companies.

Report warns that vulnerable EU citizens at risk of not securing right to remain
The Guardian reports that Oxford University’s Migration Observatory has warned that vulnerable EU citizens are particularly at risk of failing to secure the right to remain in the UK after Brexit. The paper also carries details of a report by Friends of the Earth, which warns of declining protections for the environment after Brexit. The Times reports that Canadian Prime Minister Justin Trudeau has offered an ‘upbeat assessment’ of a trade agreement with the UK after Brexit, but India has been less positive.

UK aid budget set for big overhaul
The Financial Times claims that the UK’s aid budget ‘is set for its biggest overhaul in years’, with the Government planning to use development spending to encourage exporters and pension funds to invest in the poorer parts of Africa and Asia. Penny Mordaunt, the International Development Secretary is due to give a speech on the topic today.

Universal Credit unfairly treating self-employed people, charity says
The Daily Mirror has details of analysis by the charity Citizens Advice which shows that Universal Credit is punishing self-employed people, leaving them hundreds of pounds worse off that directly-employed workers earning the same amount. The charity has called on the Government to ‘look again at the design of the benefit’.

Hancock threatens Facebook over data privacy
The Guardian says that the Digital, Culture, Media and Sport Secretary Matt Hancock has warned Facebook that it is not above the law and could be subject to further regulation is it does not protect users’ data more effectively. Hancock held a meeting with the firm, which sources described as ‘robust but constructive’.

Ministers considering chemical castration for sex offenders
The Daily Telegraph reports that ministers are exploring the use of chemical castration on sex offenders, following trials at six prisoners across the country. A source says that as many as 120 serious offenders have already accepted the treatment, with the paper revealing that the rate of reoffending for sexual offenders has risen by 34% in four years.