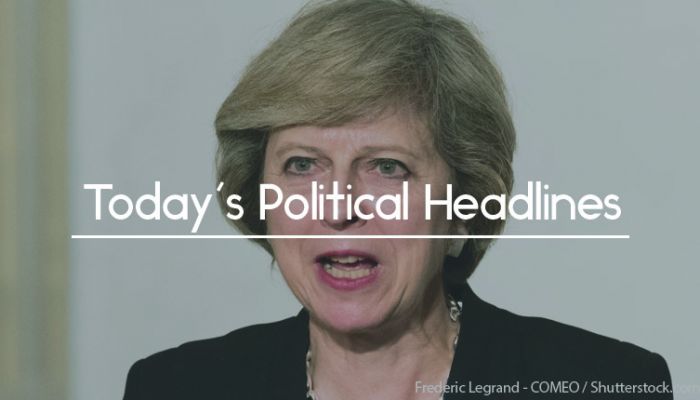 Today’s Political Headlines include Theresa May facing questions on Syria, the rise of personal health budgets, the meeting of the Commonwealth heads and the Government’s rejection of a Windrush issues discussion.

Theresa May to face MPs’ questions over Syrian air strikes
The BBC says that Theresa May is to face questions from MPs today about her decision to authorise air strikes against the Syrian government. Opposition parties have criticised the decision not to consult MPs, with Labour calling for a change in the law. The Daily Telegraph reports that Russia has launched a ‘dirty tricks’ campaign against the UK and the US in retaliation, with Whitehall sources citing a 20-fold increase in Russian disinformation online.

Personal health budgets to be available to more patients
The Times reports that the Government wants to increase the number of people with ‘personal health budget’ from 23,000 to 350,000. Under the scheme, people will have the right to select and pay for treatments they want, so long as they are approved by a doctor. The scheme will be widened to include people with mental health problems, dementia, physical and learning disabilities, army veterans and wheelchair users.

London set to host Commonwealth meeting for the first time in 20 years
As the Financial Times reports, London is hosting the Commonwealth Heads of Government Meeting for the first time in twenty years. Theresa May is to use the opportunity to pledge to put the 52 other Commonwealth nations at the heart of ‘global Britain’. The Daily Telegraph says that Theresa May is establishing a £7m fund for female entrepreneurs in the Commonwealth, and that Jeremy Corbyn has said that the Prince of Wales should not automatically succeed the Queen as head of the organisation.

Government rejects request to discuss Windrush generation immigration issues
The Guardian says that Downing Street has rejected a formal diplomatic request from representatives of 12 Caribbean countries to discuss the immigration problems being experienced by some Windrush-generation British residents. Officials have said that there will be ‘a number of opportunities’ for the matter to be raised with the Prime Minister at the Commonwealth meeting.

NHS Digital criticised over data protection
The Financial Times carries details of a report by the Commons Health and Social Care Committee, which finds that NHS Digital ‘appears unable to protect patient data’. The committee expressed concern that personal non-medical information had been shared with the Home Office in order to trace illegal immigrants.

Lords report recommends sharing public datasets
The Times says a report by the House of Lords Artificial Intelligence Committee has recommended that data held on people by the NHS and other public institutions should be made available to artificial intelligence firms to counter giant US technology committees. The Daily Telegraph focuses on the report’s suggestion that ‘killer robots’ could become reality unless the Government improves its regulation of artificial intelligence.

Suspended Conservative MP interviewed by police
According to The Times, police have interviewed Charlie Elphicke, an MP suspended by the Conservative Party in November, over alleged sexual offences. He denies any wrongdoing and says that he is ‘completely confident I will be able to prove my innocence’.