Parliament returns from recess today and the Prime Minister faces a rough ride in the Commons with an emergency debate on her decision to join America and France in targeting President Assad’s chemical weapons facilities. The subject dominated yesterday’s political programmes, with several high-profile guests on both Marr and Peston discussing the issue.

On Marr, Corbyn attacked the Prime Minister over the decision not to consult MPs and demanded a ‘war powers act’, which would force governments to get parliamentary approval for military action. Corbyn also suggested ‘other groups’ involved in the Syrian civil war may have been responsible for the chemical weapons attack in Douma. Corbyn stated that there was no legal basis for the airstrikes, and criticised the Prime Minister for following Trump’s lead, describing it as a ‘policy made up by Twitter’. In regard to the Salisbury poisoning of Russian double-agent Sergei Skripal and his daughter, Corbyn said that he wants to see ‘inconvertible evidence’ that Russia was responsible for the attack.

The Foreign Secretary, Boris Johnson, also appeared on Marr, with a contrasting rhetoric, criticising Corbyn for denying the likelihood of Russian involvement in the Salisbury attack, describing his viewpoint as a ‘blindness to reality’. Johnson defended the decision to send air strikes, explaining the importance of sending a message to the Syrian leader to deter the ‘barbaric use of chemical weapons’. He also refused to rule out another attack on the region.

On Peston, Chancellor of the Duchy of Lancaster David Lidington stated that there are no plans for legislation with regard to Corbyn’s proposal for a war powers act. Shadow Foreign Secretary Emily Thornberry also appeared on the show, arguing that Trump should have worked with the UN. She said that it cannot be Donald Trump and the UN making decisions unilaterally. Green Party leader Caroline Lucas also weighed in on the issue, criticising the Prime Minister’s timing of the bombings and accusing her of purposely avoiding a debate in Parliament.

On Sunday with Niall Paterson, First Minister of Scotland Nicola Sturgeon also criticised the Prime Minister for not seeking Parliament’s approval. She said that the strikes risk ‘escalating an already dangerous situation’, and argued that they do not contribute towards a long-standing and lasting peace in Syria. These comments were echoed by Shadow Justice Secretary Richard Burgon, who emphasised the severity of taking a country to war and accused the Prime minster of paying more heed to the Twitter tantrums of Donald Trump than the British Parliament.

Liberal Democrat leader Vince Cable claimed that the decision not to consult Parliament before launching the attack was taken for reasons of political weaknesses and fears of losing the vote. He said that it is essential that the Prime Minister builds a consensus at home before taking action abroad. 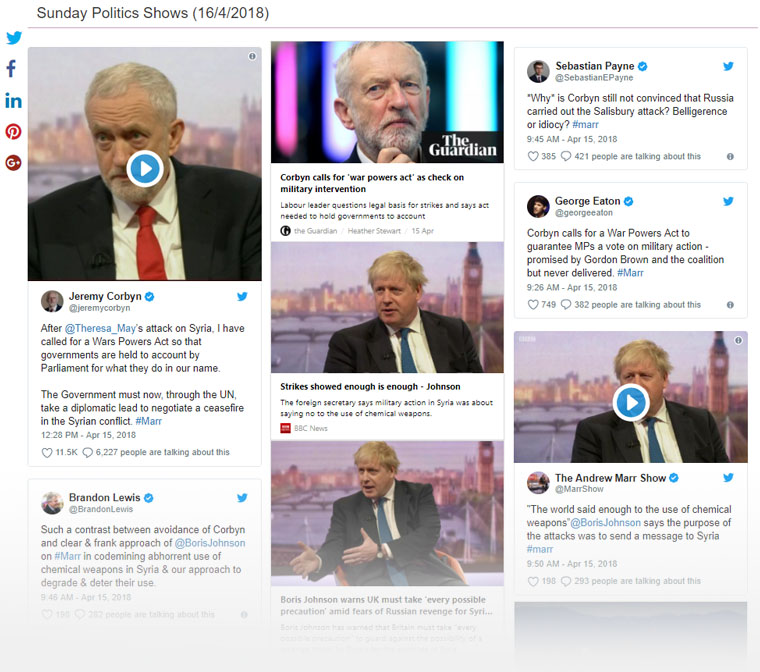