You are here: Home / PR Pulse / PRCA publishes LGBTQ+ Workplace Advocacy Report
Previous Back to all Next 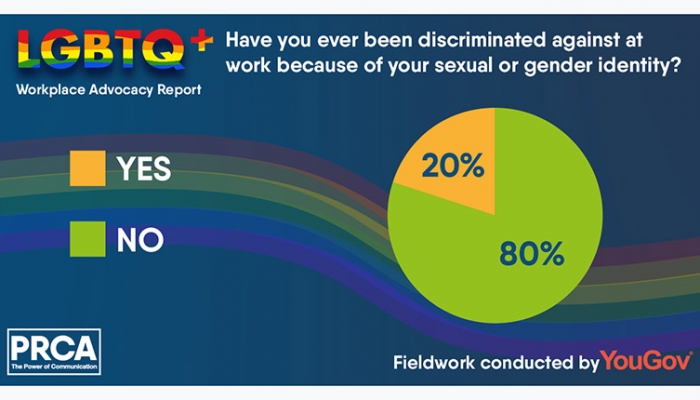 Results from the PRCA survey on LGBTQ+ inclusivity in PR and communications show that there is far to go for true equality despite ongoing progress within the industry.

Commissioned by the PRCA last summer, and undertaken with fieldwork by YouGov, results of the survey will inform the agenda for the industry body’s LGBTQ+ group throughout 2021.

The report surveyed PR and comms practitioners, 40% of them members of the LGBTQ+ community, on inclusivity in the workplace.

Positive results show wide-spread support for same sex marriage across the respondents – over 97% – and comfort with discussing topics including sex, marriage, dating and gender identity with both cisgender/heterosexual and LGBTQ+ colleagues (though LGBTQ+ respondents admitted to feeling more comfortable discussing these topics with fellow LGBTQ+ colleagues).

Where further work needs to be done shows in findings regarding sexual and gender identity. 24% of respondents admitted that they assume a colleague is cisgender and heterosexual unless informed otherwise, assuming cishet as a default identity, 29% of respondents were not aware of any LGBTQ+ colleagues holding senior leadership positions and 16% still believe LGBTQ+ do not receive the same opportunities as cisgender and heterosexual colleagues. Backing up this last point were anonymous comments from respondents raising concerns over continuing stigmas and stereotyping and a fifth of LGBTQ+ participants reporting experiences of discrimination at work.

‘Discrimination in any form, no matter how small or harmless it may appear, should never be tolerated. But it’s clear from these results many LGBTQ+ people in our industry are experiencing it – and that can’t be overlooked,’ said PRCA LGBTQ+ Chair Katie Traxton.

‘This issue should not be one that falls on the hands of the LGBTQ+ community to change. As allies and leaders, we should all be holding ourselves accountable for driving representation and inclusivity within our own organisations, and we need clear objectives, actions and KPIs to do that’.

The PRCA’s LGBTQ+ group will campaign for zero tolerance on discrimination within the industry and has a series of events planned for 2021. Its free webinar on 27 January will feature an expert panel discussing the results of the survey and next steps for the group and the industry at large – find out more on the PRCA website to join from 5pm next Wednesday.

‘The PRCA encourages everyone to call out discriminative remarks and microaggressions whenever you hear them,’ said Katie Traxton of the ongoing work needed for an inclusive workforce. ‘The only way we’ll change these statistics, is if we all act.’