You are here: Home / PR Pulse / Pretty dangerous: how can you ensure the influencers you work with stay...
Previous Back to all Next 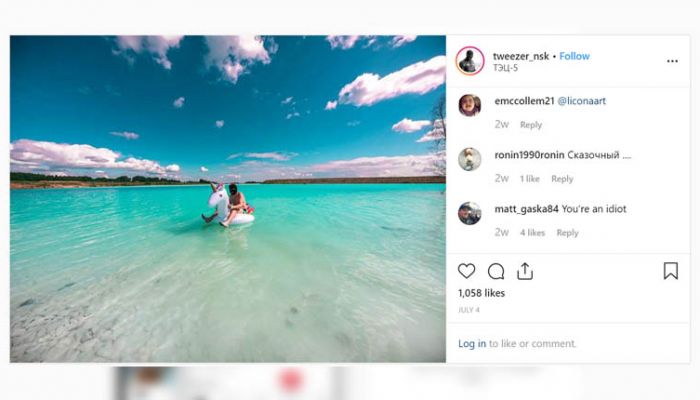 Taking risks – and taking pictures of those risks – is what separates influencers from their followers. Sharing aspects of your life online that the rest of us keep private, and investing time in creating a profile with no guarantee of success, is a risk most of us won’t take.

An office job is safer, but potentially not as profitable as, say, being able to sell gamer girl bathwater after becoming popular online. Risk for the online influencer can bring rewards of attention, followers and clout, but badly-planned risk can cause great harm to reputation and personal safety. Scary examples of influencers acting dangerously for their audience now pop up in the mainstream media on a regular basis, so we’ve asked PRs who’ve worked closely with influencers how to keep those tempted by risky shots safe.

Feeling green after visits to the blue ‘Novosibirsk Maldives’
Novosibirsk in Russia has a lake with water so blue it’s almost unnatural… which it actually is, being a man-made ash dump for the local coal plant. Unfortunately, it’s also being used as the location for glamourous Instagram photoshoots. Those who’ve chosen to swim in the toxic water for pictures have reported allergic reactions and skin irritation alongside social success. So, is it worth it?

‘There are safe areas to get beautiful shots, such as controlled viewpoints, safe pools and there are even some lovely picturesque indoor spaces that have been set up now, with their “instagrammability” being their main attraction. If you’re an influencer, perhaps all of your income will come from promoting products and services on your platform. Do you really believe that those said things would be promoted to a heightened extent if you place yourself in a dangerous position to photograph them?’ – Jessica Pardoe, digital PR & outreach executive at Tecmark

‘I’d recommend to any influencers to look elsewhere as you can find plenty of alternatives that won’t involve losing an organ or their sight. Norway offers a number of locations that look incredibly similar, if not better – I would push for them to find an alternative scene for their shoots. As bad as it is to say, a huge amount of influencers images are touched up on Photoshop or via apps, therefore while they might be taking huge risks to get that turquoise shot, the question remains whether it is worth it when you could be paddling in the Brighton sea and with a few flicks of the finger you could make it look like an exotic resort’ – James Carfell, marketing for Collier

Instagram couples pretend to be Spider-Man and Mary Jane
Kelly Castille and Kody Workman of Instagram account positravelty received a backlash after posting a pic of Kody dangling Kelly from an infinity pool during a kiss.

‘At the end of the day we are to hold ourselves accountable for the decisions that we make,’ is what they posted next to the photo. Others held them accountable for promoting the dangerous lengths they went to for a pretty picture. They’re not the only dangerous kissers on Instagram, Camille and Jean of backpackdiariez shared one of their ‘wildest kisses’ in May, taken while hanging out of a train door.

‘The best thing PR agencies can do to make sure influencers don’t put themselves in risky situations is to remind them that they – the influencer – are essentially a role model for their followers. When an influencer does something that is out of bounds or potentially dangerous, they are setting a negative precedent. Brands should be very clear when drawing up contracts about what behaviour is or isn’t acceptable’ – Gabrielle Sarpong, PR executive at Feel Good Contacts

Chernobyl series sparks selfies
Tourism to Chernobyl is up following the success of the HBO series detailing the events of the 1986 tragedy – Instagrammers travelling to the site to take some pretty awful selfies is also reportedly on the rise. As well as coming across as callous and potentially harming their reputation, influencers posing in front of abandoned disaster areas also risk their health.

‘When it comes to talent putting themselves in dangerous positions, we would ensure that their safety is our top priority. There is no point risking a life ‘for the gram’. And if a more particular shot was required, we would ensure that all the right precautions were taken, the conditions were right and we have the right creatives to assist in production. Ultimately co-creating the content (instead of an individual curating the content alone) is paramount to ensure everything runs safely, smoothly and avoids any unnecessary danger’ – William Soulier, CEO and co-founder of Talent Village

Overexposure to idealised images could be harming the mental health of influencers
Just as posing in toxic water, over dangerous precipices and near radiation can result in pretty shots for social, obsessing over the shares they get can harm the influencers posting them. Recent research published in the Psychology of Popular Media Culture journal found that Instagram, more than any other social media platform, triggers comparisons and feelings of inadequacy and anxiety. This has led the platform to trial hiding public-facing stats, in the hopes it will reduce the pressure on users (read our white paper about that very topic here).

‘In the age of Instagram manipulation, photoshop editing and augmented reality, it is hard to know which image is genuine and which has been changed to look so incredibly far from the original shot. Many influencers will take 100 photos before posting a single one, trying to get that ideal shot and forgetting the natural aspect of showing who you are and letting your personality shine through’ – James Carfell

‘When you work with an influencer as a PR, they effectively work for you. I truly believe that those working in influencer marketing know exactly how to maintain relations with their influencers, and how to keep them out of harm’s way when they are promoting’ – Jessica Pardoe

If you’re a PR who’s looking to connect with influencers, but aren’t sure how to help them avoid the risks? You can encourage the social media generation to behave responsibly outdoors and find professional influencers to work with on the Vuelio Influencer Database.