You are here: Home / PR Pulse / PRmoment Awards 2018
Previous Back to all Next 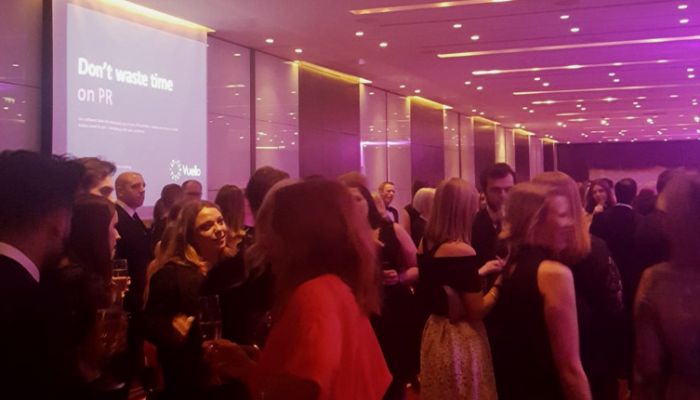 Huge congratulations to all the winners of the PRmoment Awards! It was a fantastic evening with winners across the whole industry, from big name agencies to smaller boutiques and specialist consultants.

We were proud to sponsor the drinks reception, which kicked off the event in style. It was great to see so many talented people in one place, able to let their hair down and celebrate their hard work over the past year. The volume of chat and excitement reached a crescendo by the time the doors opened for the awards.

The evening began with a welcome speech from the founder of PRmoment, Ben Smith. Thank you to Ben and the whole team at PRmoment for a great night. Hosting the awards throughout the evening was the hilarious Ellie Taylor (as seen at the Vuelio Blog Awards 2017!). The awards ceremony began with plenty of laughter, food and drink, but it was the awards and their winners that took centre stage.

Vuelio sponsored two awards: Event of the Year and Public Sector Campaign of the Year. Taylor Herring and Channel 5 scooped Event of the Year for their headline-grabbing pop-up restaurant, ran entirely by nuns serving soup. The pop up not only promoted the Channel 5 series Bad Habits: Holy Orders, but also offered diners a phone amnesty, possibly making it the first Instagram-free restaurant in London!

Kindred for HM Treasury & The Royal Mint won the Public Sector Campaign of the Year award. Kindred were tasked with getting the public and businesses excited for the launch of the new pound coin and did just that with the ‘New Quid on the Block’ campaign.

The only way to end any good awards ceremony is with plenty of dancing and there were many shapes being thrown! Thank you to everyone who attended (especially everyone Vuelio got to speak to) for a brilliant 2018 awards, and well done again to all the winners.