You are here: Home / Politics / Tactical voting spikes on social media in final days of #GE2019 campai...
Previous Back to all Next 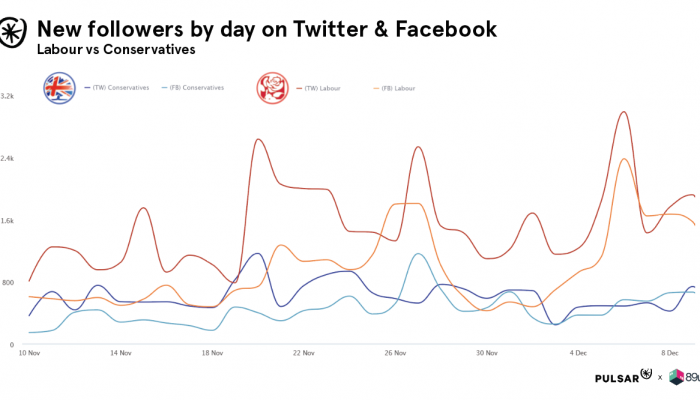 Vuelio’s sister company Pulsar has been tracking social media conversations across different platforms and highlighting the most popular policies, as well as what voters are saying and sharing online during the general election campaign.

The latest update of the Pulsar/89up social election index analysis of social media followers and content engagement across the main social networks and online sources reveals over 700,000 mentions of tactical voting on Twitter since the beginning of the general election, with a significant spike in interest from 5 December. The level of conversation on this topic has consistently risen since the start of the general election.

The 2019 General Election is primarily a two-horse race on social media with the Conservatives’ higher social media spend going toe-to-toe with the huge personal social media presence of Labour leader Jeremy Corbyn. The Labour campaign organisation Momentum and prominent party supporters like Owen Jones have also been amplifying the Labour campaign messages and directing activists to the most crucial electoral battlegrounds.

Analysis of social media followers and content engagement across the main social networks and online sources (blogs, forums, online news) between 8 November and 10 December 2019 reveals significantly higher volumes of engagement with content from Jeremy Corbyn in comparison to that from Boris Johnson. For both leaders, the engagement levels of their social media posts have dropped in the last week. 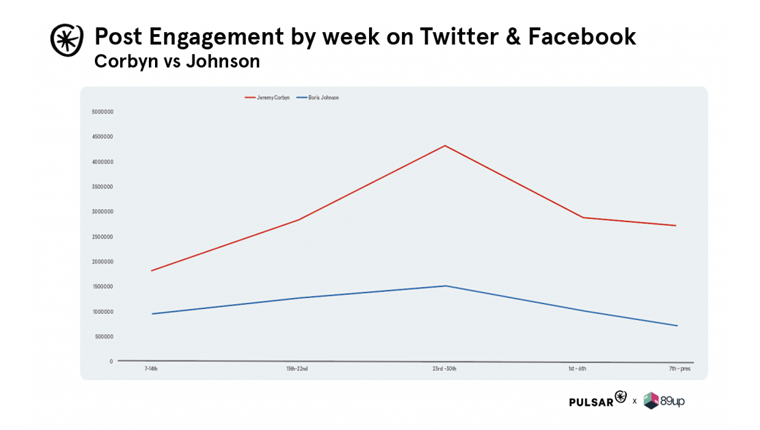 Media sources
The social election index also collated information on the media sources that have been shared most widely during the campaign. These point to sources which are arguably more favourable to the Labour campaign and show that the Guardian, the Independent and the Mirror are the three biggest websites shared during the campaign, with the BBC in fourth place.

In terms of actual content, the most widely shared links during the campaign includes highly debated photo story of a four-year-old boy sleeping on a hospital floor due to a lack of beds. It also includes the ‘Register to vote’ link which ensured a large boost in voter registration early in the campaign. The impact of this spike in registrations will not be fully known until the results are in but it reveals new levels of engagement with politics. 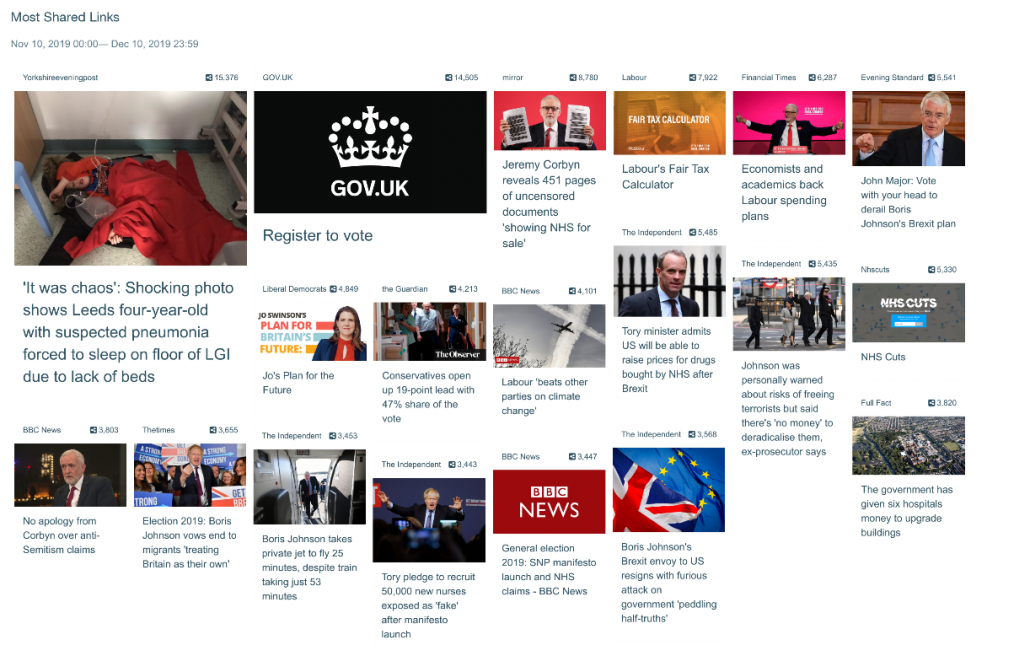 Corbyn ahead
Jeremy Corbyn has been adding new followers at a much more rapid pace than Boris Johnson across social media platforms, with the Labour leader getting a major uplift in the number of his social media followers after his much-criticised interview with the BBC’s Andrew Neil on 26 November. Conversely Boris Johnson received heavy criticism for not agreeing to an interview with Neil despite all other party leaders doing one. A video clip by Andrew Neil with the topics he wanted to ask the Prime Minister about became one of the most widely shared pieces of content on social media. 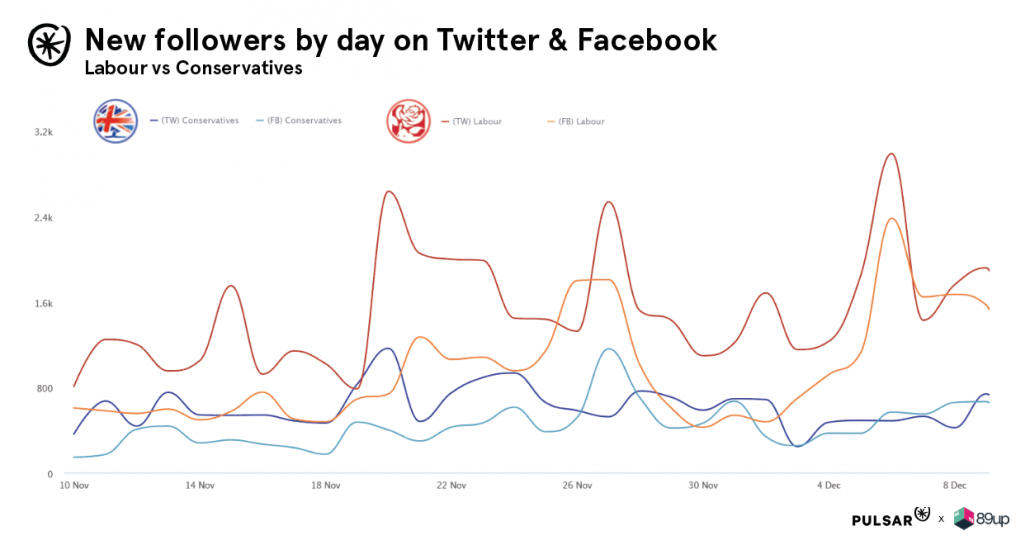 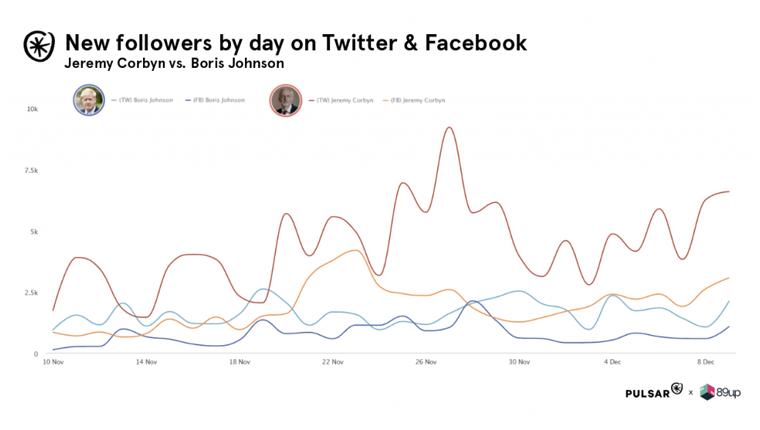 The Jeremy Corbyn social media surge has had knock on impact on engagement for the respective political parties with Labour staying ahead of the Conservative party in terms of engagement across Twitter and Facebook. This could make a huge difference on election day itself in terms of boosting voter turnout and ensuring that party activists are campaigning in the constituencies where they can have the most impact on the overall result. 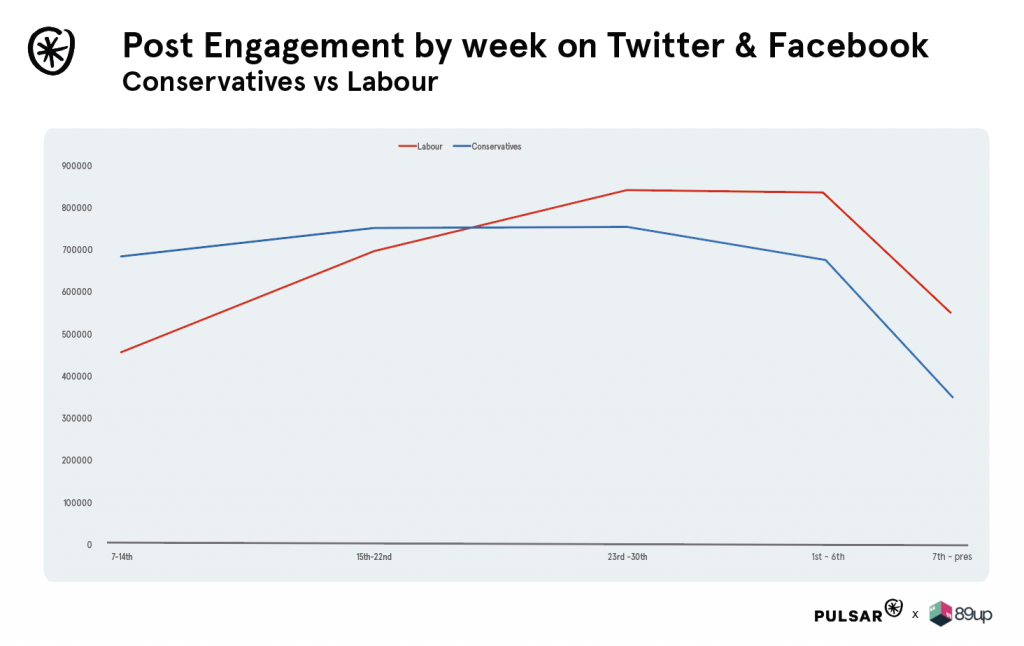 The major issues of the campaign

Brexit remains the topic driving the most online conversation during the General Election, followed closely by the NHS. Yet, for arguably the first time in British history, the discussion about racism has driven almost as much conversation as the economy. Social media conversation about racism, whether anti-Semitism or Islamophobia, had 484,360 mentions compared 508,124 of the economy on Twitter in the period up to 10 December. Of the 484,360 mentions of racism, 86,108 are specifically mentions of Islamophobia (18%) and 203,224 mentions of anti-Semitism (42% of total mentions). 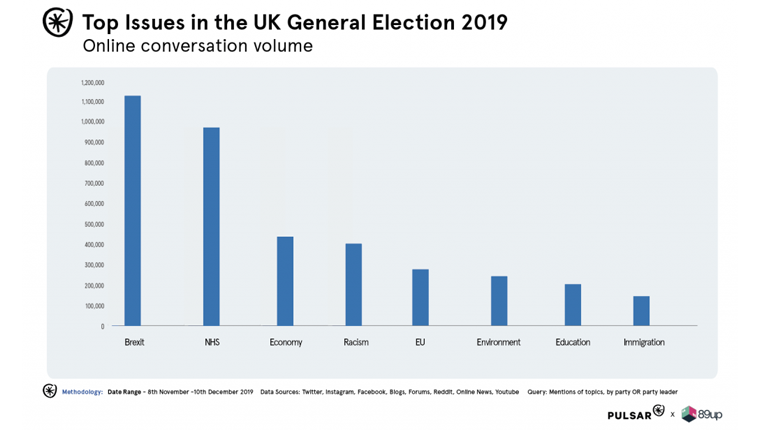 On Monday 16 December, Pulsar will compare social media success with the results of the General Election to determine the impact of social media on the results. Whether Corbyn and the Labour party can use their current social media momentum to boost voter turnout remains to be seen.

Kelly Scott is the Head of Political and Stakeholder Strategy at Vuelio.