You are here: Home / media analysis / The ‘Big Data’ deal – Surefire or backfire?
Previous Back to all Next 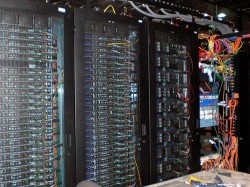 In just under a year, Netflix Inc. went from being a DVD-shipping company to a market leading video sharing service, outpacing leading television networks and bumping its share value threefold on the way. How? By investing in Big Data analytics to help breakdown media consumption patterns and understand what it is their consumers really want out of entertainment.

It came as no surprise then when the company, dictated by big data findings, outbid stalwarts HBO and AMC with its $100mn proposal to acquire exclusive rights to the award-winning ‘House of Cards’ series, with not so much as a single preview. The move was bang on. Last month Netflix earned the first Primetime Emmy Award nomination for original online only web television, and three of its web series including ‘House of Cards,’ earned nominations.

Netflix’s bold investment strategy clearly had little to do with blind faith in original content, but more with the comprehensive data mining procedures in place.

Like Netflix, media and entertainment (M&E) companies around the world are pumping big money in data analytics to help make sense of the massive shift in the way content is produced and consumed in the new digital environment. Today, the age old model of ‘content is king’ no longer applies to media companies, with the reins, or should we say gadgets, in the hands of consumers. Companies within the M&E sector are seen grappling to keep up with the challenges and demands of the digital era and are increasingly looking to data analytics to help make sense of it all.

Case in point is the proposed $35bn transatlantic merger between Publicis and Omnicom, making up the world’s largest advertising company which is poised to change the advertising industry as it now exists. ‘This is a new company for a new world,’ Publicis chief executive Maurice Levy said. ‘It will be able to face the exponential development of new internet giants like Facebook and Google, changing consumer behavior, the explosion of big data, as well as handle the blurring of roles of all the players in the market.’

The ‘new world’ Levy refers to is a digital one which will be powered by the 2.5 quintillion bytes of data that is being generated daily by companies around the world.

The PricewaterhouseCoopers (PwC ) Australian Entertainment and Media Outlook for 2013-17 throws more light on the growing significance on Big Data for media. It noted: ‘Data analytics – or tracking customer information – has become a crucial strategic exercise for all companies, however crunching the numbers has never been so important for the media and entertainment industry (M&E) as the rapidly changing digital environment continues to change customer expectations.’

In addition, IBM, a leading technology and consulting firm, released a report titled ‘Smarter Media and Entertainment,’ which dwells into the effects of the media industry’s ongoing digital transformation. It points out that for a sector that already trades heavily in digital information; data is the key to operations and customer value propositions.

Graeme Noseworthy, strategic messaging director, media and entertainment, IBM puts this report in perspective in his blog: ‘The fact is that M&E has always been a “content centric” industry. They created the content and controlled the distribution windows and venues where that content was consumed by customers. However, in today’s age of digital mobility, consumers want what they want and where they want it…which could literally mean anywhere at any time on any device.’

While bigger companies do have the means to invest in data analytics, it is the smaller media houses and design companies that find it a path too intimidating to explore. However, as this article points out, there is an array of technologies that give small businesses access to cost-effective, sophisticated data analytics.

The fact that there is no dearth and definitely no end to data is well established, but it will be interesting to know if media companies have a limit to how much matter they can actually use, and at what point can all this data backfire on the simple workings of a company.