You are here: Home / media research / The week on the web: 15-19 July
Previous Back to all Next

This week, the biggest stories from the web feature three British stars (Rowling, Sugar and Rooney), and one British pastime (talking about the weather).

Using Cision Social Media, we can reveal which story received the most social media attention: 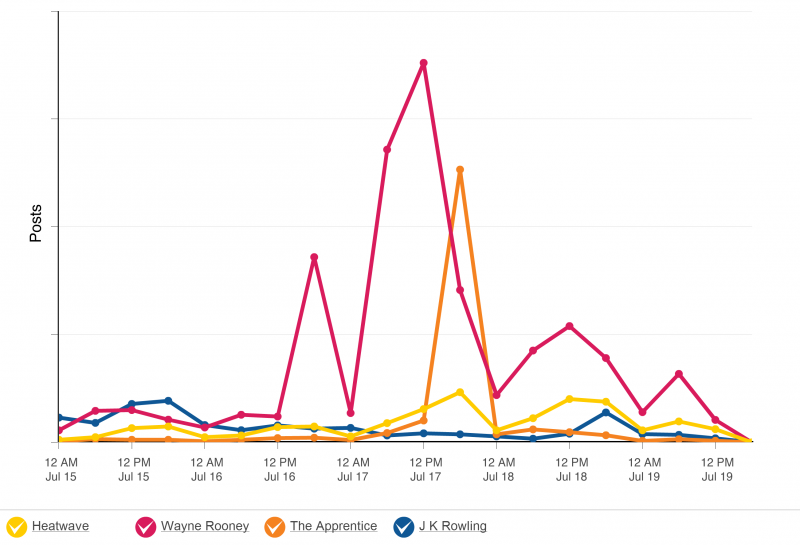 Wayne Rooney
The biggest story of the week is Wayne Rooney being left ‘angered and confused’ by Manchester United. The striker has also been linked with Chelsea and Arsenal, driving his social media mentions above the other big stories of the week. Of the many hashtags that have arisen about Rooney, #ThingsThatAngerAndConfuseWayneRooney was an organic trend that attracted further media attention.

The story made it onto Just Arsenal, in a post discussing the transfer targets of Chelsea and Arsenal. Finishing with the line: ‘I for one would be happy to see him in an Arsenal shirt and would love for us to get our own back for van Persie’, the post has generated a lot of discussion.

CaughtOffside reports the Daily Telegraph story that Petr Cech, Chelsea keeper, would love to see Wayne Rooney at the club.

The Apprentice
The second biggest story comes from Lord Sugar’s latest ‘Apprentice’ hire. As 40% of peak time Twitter traffic is also watching TV, The Apprentice’s inclusion should come as no surprise. If you haven’t watched it yet, and want to, look away now.

Unreality TV has published Dr Christian Jessen’s [of Embarrassing Bodies fame] tweets suggesting the winning business from Dr Leah Totton needs more senior guidance. His social media comments include: ‘The apprentice winner in question may well be entirely competent but I do worry about the image projected on the show of these procedures’.

DD’s Diary expresses some disappointment at the winning business idea. The post argues: ‘No longer something that only celebrities resort to as a guilty secret, popping into a Dr Leah for a top-up of fillers will be as easy as getting a latte from Starbucks’.

A rather different take comes from The High Tea Cast. With ‘alternative outcomes’ for those that were disappointed in The Apprentice Final, the blog has Leah and Luisa in ‘The Sugar Games’, ‘The Apprentice and the Tidey Sideys’, and ‘Lord of the Sugar’.

Heatwave
The surprisingly seasonal weather was the next biggest topic of the week, with the heatwave taking people surprise and causing more than a few gripes. It proved to be a burning issue on the web [sorry, couldn’t resist], with a mixture of reports and tips.

The UK Travel Blog published the news that Britain’s heatwave is now at level three (according to the Met Office warnings). The post also reveals that this is the most prolonged heatwave since 2006; there isn’t an official law stopping employees from working in high temperatures; and the only other level available from the Met Office is level 4 – a national emergency.

The Guardian’s Food & Drink section provides tips on what to eat during a heatwave, with dishes that require little cooking time and advice on ‘cooling foods’. This is far more upbeat than the Guardian’s other take on the heatwave, ‘Will the heatwave kill us all?’

Frank Chalk sums up his feelings toward the extreme heat in a short post that starts: ‘I can’t help but think that we’re getting a bit carried away with this “heatwave” stuff’.

JK Rowling
And finally, for those pseudonym fans out there, JK Rowling has released a novel under the penname ‘Robert Galbraith’.  The story, which many thought was a publicity stunt, has since been revealed to be a leak from a law firm; the BBC reports that Rowling is very angry at the news.

Jack of Kent has chosen to focus on the law firm leak and posed the question: ‘Can J.K. Rowling sue for breach of confidentiality?’ It discusses the case in legal terms and the likelihood of a successful lawsuit.

Girl Lost in the City questions why JK Rowling felt the need to hide behind a male name. Exploring what it means to write as a woman and to write ‘genderless’ the post compares the move to the Bronte sisters.

AbeBooks’ Reading Copy
can possibly claim the best headline with: ‘Breaking News: JK Rowling Actually a Man Named Robert Galbraith’. The post goes on to suggest the whole thing is a clever piece of marketing and applauds JK Rowling for her excellent work.

What do you think of the biggest stories of the week? Was there anything that happened that we should have included? Let us know in the comments below.

The graphs and social media information made with Cision Social Media via CisionPoint. All the blogs and their authors are in the CisionPoint Media Database.