You are here: Home / media research / The Week on the Web 5-9 August
Previous Back to all Next

Knowing me Week on the Web; knowing you Week on the Web reader. Ah-Ha! This week we follow the news that Peter Capaldi is Doctor Who, with other internet phenomenon including something from our very own blog.

Using Cision Social Media we can see how a fake burger, a yeast-based product and a Norwich DJ have been causing their own stir: 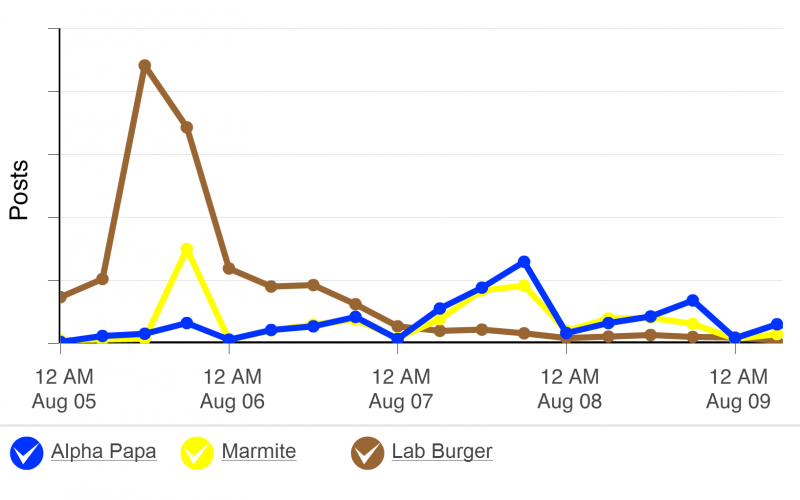 Alan
Alan Partridge’s latest outing is in Alpha Papa which goes on full UK release today. It is the first time the character has been the star of a major motion picture, and the blogosphere has reacted accordingly.

Burger
The £215,000 hamburger that was grown in a laboratory was consumed this week at a news conference in London. The ‘more sustainable way of meeting a growing demand for meat’ was funded by Google’s co-founder Sergey Brin.

Marmite
The Marmite controversy is, for once, not about whether you either love or hate the [really tasty] spread. Its new advertising campaign sees Marmite jars ‘recovered’ from homes where they’ve been ‘neglected’. The complaints largely claim the advert ‘trivialises animal and child cruelty’.

Cision
Cision experienced some controversy this week when we published a guest post from Cybher event founder Siân To titled: ‘No mummy bloggers allowed – Why I founded Cybher’. In the post, Siân gives her views on some bloggers’ approach to brands and freebies, and explains what makes Cybher stand out. The post received a great deal of social media attention and a raft of comments on the blog.

For Cision, it was the main story in our Week on the Web. What was yours? Let us know in the comments below.

All the graphs made with Cision Social Media via CisionPoint. All the bloggers are listed are available in the Media Database and were found with Cision’s free Influencer Search.