You are here: Home / communications research / Global Social Journalism Barometer 2013
Previous Back to all Next

How does the use of social media by journalists in the UK compare with those in other countries? The Social Journalism Study has once again allowed us to compare participating countries in order to see which has the most social-media-savvy journalists. 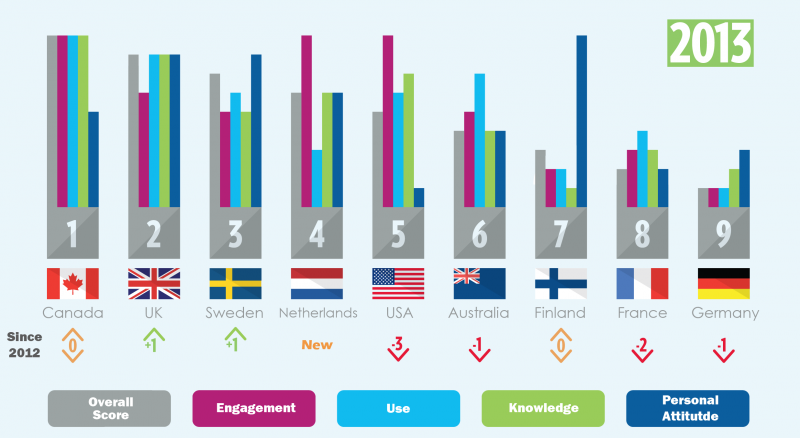 As in 2012, Canada comes out on top with high scores in Use (how extensively a journalist uses social media in their day-to-day) and Knowledge (how much a journalist knows about social media). The UK is up one place to second.

The Netherlands is a new entry in fourth, displaying high levels of Engagement (how much a journalist interacts with their audience).

The USA has dropped three places from second to fifth. Compared with 2012 it has lower scores in all areas except Engagement, with a particularly low score in Personal Attitude (how positive an effect a journalist considers social media to have on their work).

It is perhaps unsurprising to see Australia has dropped one place to sixth; The Australian recently published an editorial claiming social media was a ‘path to ruin’ for journalists.

Further down the table, Finland’s high Personal Attitude score is not supported by any other areas, and once again it is Germany that has the lowest accumulated score.

The news is encouraging for the UK’s media as journalists are embracing and making the best use of social networks. The UK Social Journalism Study 2013 also revealed that more journalists have more followers, they prefer to be contacted by social media and 92% use Twitter.

Download the UK Social Journalism Study 2013 for free for more information and insight in to how journalists are using social media in their daily roles and what this means for the PR and communications industry.