You are here: Home / PR Pulse / How to communicate in the metaverse… also, what is the metaverse?
Previous Back to all Next 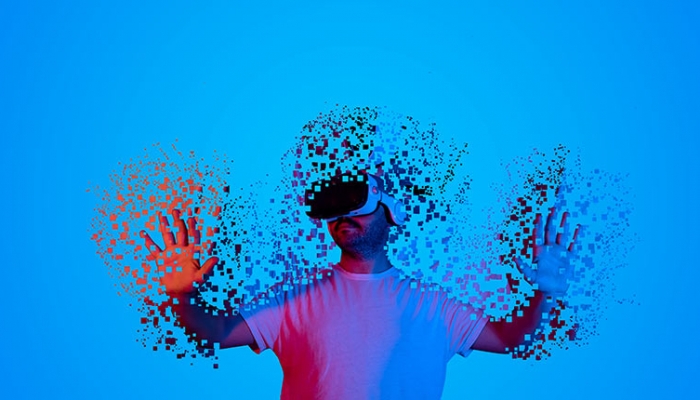 If you’re up on your PR and comms trends for 2022 and the years ahead, you will have read about the metaverse and just how important it is going to be for the industry. But… do you actually know what that word means? Do you understand how you and your team might use it for upcoming campaigns? How to talk about it to clients and other brands?

To help prevent you from any out-of-touch floundering in future stakeholder presentations and competitive pitches, here’s how the industry is already making great use of the metaverse and how you can join, too.

What is the metaverse?
To cut through all the jargon: it’s a virtual space for interacting. With other people, with places, with items.

‘The way I try to explain it to friends is, it’s like a hybrid of The Sims, Rollercoaster Tycoon & GTA (without the crime),’ said The Playbook’s senior sport and brand communications executive Rob Baney.

‘Creating your own The Sims-like dream world, building your entertainment offering Rollercoaster Tycoon-style, and then having you and your mates explore this world in the best clothes and with the coolest car, like your character in GTA.’

If you aren’t a gamer, the concept of a metaverse has long been established in science fiction and regularly features in film (Ready Player One and The Matrix, for some dystopian examples), and even portrayed quite poorly in 90s thrillers you may have seen, like The Lawnmower Man and Disclosure. In the latter, for example, it’s shown as already being a part of work tech. Michael Douglas needs to hack a computer – instead of sitting down to type, he dons a VR headset and gloves for his search and walks through a Virtual Reality Database.

You could say that’s a prediction of how the metaverse may shape up in the next few years – full integration into our lives, even office documents. You could also say ‘why did Michael bother when Ctrl + F is right there – who has the time for that’. But that would be overlooking the allure of realistic interactions with surroundings otherwise closed off, and plenty of us want that.

Why is the metaverse so popular right now?
While a metaverse is not a new concept – not even to the comms industry, who had the opportunity to explore it in ‘Second Life Marketing Safaris’ as far back as 2007 – it’s resonating strongly now, particularly in the wake of Facebook’s widely-publicised rebrand to Meta and new strategy to build ‘the’ metaverse, as we search for new ways to connect in our day-to-day.

When people wanted to be with those they couldn’t see in the flesh in the early days of the pandemic, downloads of applications like Zoom, Teams and Houseparty boomed. Games like Animal Crossing: New Horizons broke records, with advertising from Nintendo showing family members and friends using their Switch consoles to fly out for quality time on each other’s virtual islands.

Conversations while fishing for bass couldn’t happen in reality during lockdown, but it could online. Connection is the value of digital spaces – that’s the value a presence in the metaverse can provide to your audience.

How are brands and businesses already using the metaverse?
Using Animal Crossing: New Horizons as an example, businesses, charities and even US politicians quickly realised its potential for engaging with consumers and integrated their branding and messages into the pre-existing world of the game. But many brands and agencies have since gone further into the metaverse – this isn’t something to get ready for in the future, this is happening now.

Recreating reality: VCCP built virtual offices in gaming and social platform Roblox, using its London Victoria office as a base design, but building in extras impossible in real life, such as an enclosure for meerkats.

Connection in virtual spaces: A Roblox-based ceremony and gig was held as part of the Brit Awards this year, with a virtual version of PinkPantheress booked to perform. Artists including Lil Nas X have also teamed up with the platform for performances.

Comms and campaigns: To publicise the new series of I’m A Celebrity… late last year, ITV launched a virtual version of the show’s castle with Fortnite Creative for viewers to explore. In fact, ITV has created a number of new ways for viewers to connect with its programming via the metaverse in this way, including an in-game Fortnite version of its entertainment show The Void.

So, should you care?
In summary – yes. At its most simple, the metaverse can be a recreation of what we know, but it can also be a fantastic version of what we want, or an overlay of extras to make life easier.

While data from We Are Social’s latest Think Forward report found that 90% of social users were ‘clueless’ about the metaverse, its quick adoption across the industry in real ways is meaningful. Current excitement about these virtual spaces may dim, but applications of them will embed into our culture and lives, long-term.

Virtual influencers are already here, and NLP (Natural Language Processing)/virtual avatars are an accepted part of online customer service. For those who need other ways to access events and experiences beyond getting on a train to a crowded gathering at a city centre, the metaverse opens up a whole world of possibility and connection. For business, it offers new ways to engage consumers continuously bombarded with images and messages in ways that will stick.

In a real world that has become increasingly unpredictable, filled with situations we can’t control, it’s unsurprising that the possibility to create others we can is appealing. And at the very least, what’s on the way should be a lot cooler than that scene in Disclosure. The metaverse can be whatever we want to make it.

If you’re ready to enter the metaverse, visit our visit to those brands setting up in Animal Crossing: New Horizons and check out our look at the influence of virtual influencers.

Want more on ways to engage the minds of  your audience? Here’s a write-up of our webinar on Neuro PR with Harvey & Hugo PR’s managing director and Leader of the Pack Charlotte Nichols