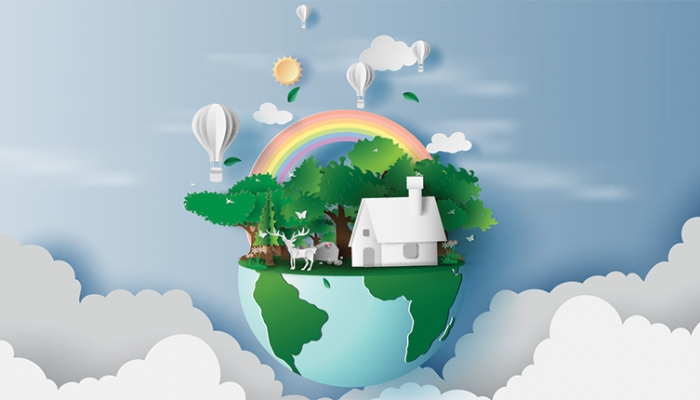 This year’s Earth Day has a lot to live up to. Coming after the highly-anticipated and high-pressure COP26, today brings opportunity for those who made big promises in October 2021 to hold themselves to account. Did the global event make real change to how organisations operate and communicate their purpose to the public?

One impact COP26 made in the minds of those paying attention to its message of climate change was the installation of a growing impatience; a need for accountability from those with the power and influence to drive action.

‘COP26 and many other political events within the last six months have highlighted the public’s growing lack of tolerance for hypocrisy,’ says Propel Technology’s lead communications consultant Claire Dumbreck.

‘For many, COP26 will be remembered for the rich elite jamming up Prestwick Airport with their private jets and then preaching to the masses about how they should give things up for the greater good.’

Perception of the global event – the success of which was predicted by Sir Vince Cable beforehand to be 60:40: ‘my heart is with the 60%; my head with the 40%’ – wasn’t 100% positive. While its failures ultimately fall on political promises that were short of expectations, the PR and comms sector had a part, too:

‘Some businesses and comms teams could have been more considered in their approaches – there were a lot of campaigns with fairly (very) loose connections to COP26!’ believes One Nine Nine managing director Barnaby Patchett.

‘The issue here was that the press was flooded with transparent attempts to ‘cash in’ on COP26 – with no real connection to the goals and aims of the conference. The best campaigns were underpinned with a clear, authentic link to COP26, from organisations making tangible, significant progress on sustainability.’

Consumers and stakeholders increasingly expect integrity from organisations, not greenwashing, and PR and comms teams are being tasked with the practicalities of that responsibility.

‘As an industry, comms was both part of the post-COP26 climate change discussion and has since had to respond to it,’ says senior PR consultant Katy Barney, who heads up Ambitious PR’s ESG & Sustainability PR services.

‘Agency-side, this has meant more clients coming to us and asking for advice on how to communicate around sustainability, meaning an imperative to upskill rapidly and get to grips with the issues.’

Accessibility of language around climate change is a must-have skill for PRs in the wake of COP26, but as an industry we’re not quite there yet, according to research conducted by the Hanover Group Strategy & Insights unit, which targeted the general public in the UK and Ireland, and business leaders across Europe:

‘Only 1 in 4 people (25%) were comfortable defining “net zero” and much less so with terms like “carbon trading” and “climate refugees”,’ says Hanover Group’s strategy & insights director Teodora Coste.

‘23% were uncomfortable defining any of the terms most often used at COP26.’

The obfuscating and grand-standing that reverberated around October’s summit isn’t necessary, or useful, for building climate considerations into campaign work. For Earth Day 2022, here are more practical steps:

‘Wind the sanctimoniousness right down!’ says Claire Dumbreck. ‘Address any perception of “us and them” before more scepticism takes hold. Demonstrate genuine short-term human benefits of acting with the environment in mind (beyond the luxury of just feeling good about it).’

‘Start at home and focus on reducing your own carbon emissions and environmental impacts,’ says Lexington’s director and head of responsible business Andrew Wilson. ‘Do you really need to fly to that client meeting? Second, be critical friends to clients, provide constructive challenge on their own operations. Do agencies have the in-house expertise to advise on Net Zero strategies and approaches to reduce environmental impacts? Third, work with brands to produce communications that help to change consumer attitudes and bring about a shift in behaviour.’

Ultimately, use your skill as a PR; if you’re part of the comms industry, you already have the tools to get the message out there:

‘Zero and environmental change are so much more than a single-issue topic – there are lots of opportunities for PR teams to get creative,’ says Katy Barney.

‘There will always be another story or angle if you’re committed to making change.’

For more on climate change and how the communications sector can help make a difference, check out this post on what PR and comms teams should know about sustainability, a reflection on the success of COP26 from the Vuelio political team, and this guest post from Sir Vince Cable featuring his predictions ahead of the summit.