You are here: Home / PR Pulse / Media attitude towards the Chancellor’s Budget
Previous Back to all Next 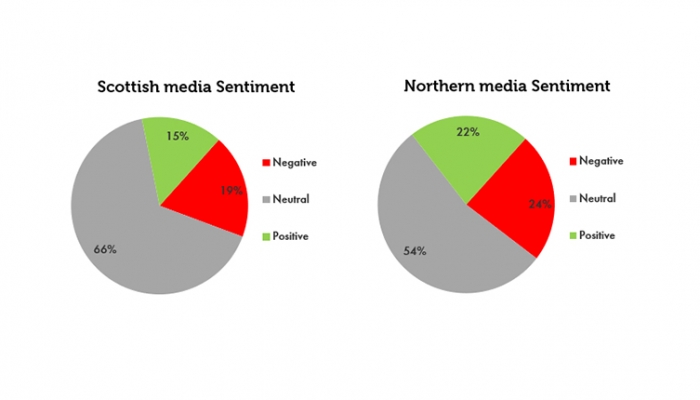 Almost 400 individual journalists across 25 news media outlets in the UK rushed to report on Rishi Sunak’s 2021 Spring Budget in just two days. While many of the articles focused on the specific announcements and what this will mean for those living in the UK, the reputation of Rishi Sunak himself was in the spotlight.

There was clearly surprise, across both traditional and social media, on just how much the Chancellor announced would be spent today and plans to recoup it in the future.

Direct negative sentiment largely emanated from third parties rather than journalists, such as the Institute for Fiscal Studies (IFS), which said ‘the biggest tax-raising Budget for 28 years has made the Chancellor look less like “Santa Sunak” and more like “Scrooge Sunak”’ and that he is ‘largely funding a mammoth £50 billion squeeze by freezing income tax allowances and hiking corporation tax’ (reported by the Evening Standard, 04.03.2021). 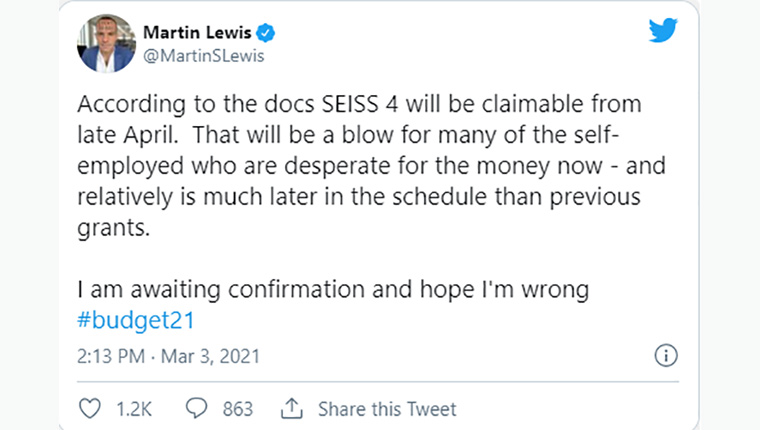 Martin Lewis, founder of MoneySavingExpert.com, took to social media shortly after the Budget had been delivered to raise concerns over the timing of the fourth SEISS grant. Posting on Twitter, he wrote: ‘According to the docs SEISS 4 will be claimable from late April. That will be a blow for many of the self-employed who are desperate for the money now – and relatively is much later in the schedule than previous grants’.

The post saw high engagement on social media and Lewis’ criticism of Sunak fuelled 74 articles across national and regional media including further warnings over the Mortgage Guarantee and on companies who ‘aren’t acting fairly over furlough for employees’. 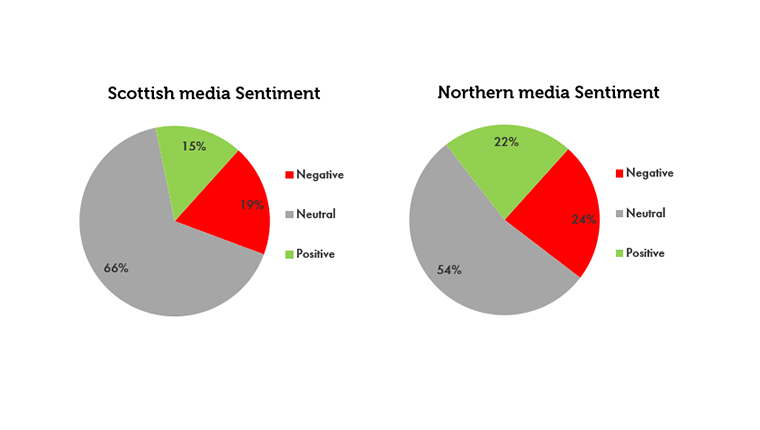 Reaction across different regions
The sentiment towards the Chancellor and the Budget announcement was more diverse in specific regions, namely in Scottish and Northern media.

‘SNP gets blistering slap down as Rishi Sunak confirms extra funding to back Scotland’ headlined the Daily Express, which was almost celebratory of Sunak following his announcement of the £1.2bn boost for the Scottish Government’s budget. However Scottish media were not so complimentary towards the Chancellor, with the Daily Record reporting “The Tory chancellor said he would do ‘whatever it takes’ but confirmed he will cut benefits for thousands of Scottish families” (03.03.2021). Even a piece about the increase to the contactless amount had melancholic undertones with regards to how quickly this will take effect, the ‘shunning’ of cash and what fraud protection will be put into place.

Negative coverage may have been mitigated due to the focus on issues in Scottish Parliament, with a significant portion of neutral coverage stemming from Scottish newspaper coverage of general roundups of the Budget announcement rather than deep dive analyses of the specific announcements. Positivity towards the extension of the Furlough Scheme was met with caution from Scottish Business Leaders, who called it a ‘temporary fix’ and warned that the roadmap must still go ahead. However there was also positive sentiment in Scotland, which was anchored around ‘Property buyers praise ‘lifeline’ stamp duty holiday set to save them thousands’ (The Herald, 03.03.2021) and welcomed Budget measures to support the green energy transition from Oil industry leaders such as Oil and Gas UK.

Meanwhile in the North, the announcement that a ‘significant part’ of the Treasury will relocate to Darlington was celebrated and was even dubbed as ‘one of the most important announcements for the North East in decades’ (Karl Pemberton, Institute of Directors). Sunak was praised by local MPs following the decision, which was made alongside granting freeport status to the Tees Valley.

‘The Tees Valley’s double success in Wednesday’s budget announcement has been hailed as a major boost for the North East’ (Bill Edgar, ChronicleLive, 03.03.2021)

For as many positive articles there were in the North, there were almost equal numbers of negative stories. Coverage counteracted the positivity over Teeside, with outlets reporting that Sunak has come under fire for lavishing funding on Teesside, but neglecting other parts of the North East. Further negativity resulted from a lack of effort to cut child poverty in the North East and a negative response from hospitality bodies, such as SIBA and the Night Time Industries Association, expressing disappointment due to no specific grant funding for the industry.

Reaction to specific announcements
Media coverage was focused on three key areas: the Furlough Scheme extension, Corporate Tax and Personal Tax, but just like the conversation on social media, Universal Credit, the Self-employed Income Support Scheme (SEISS) and the Stamp Duty Holiday were all heavily discussed. 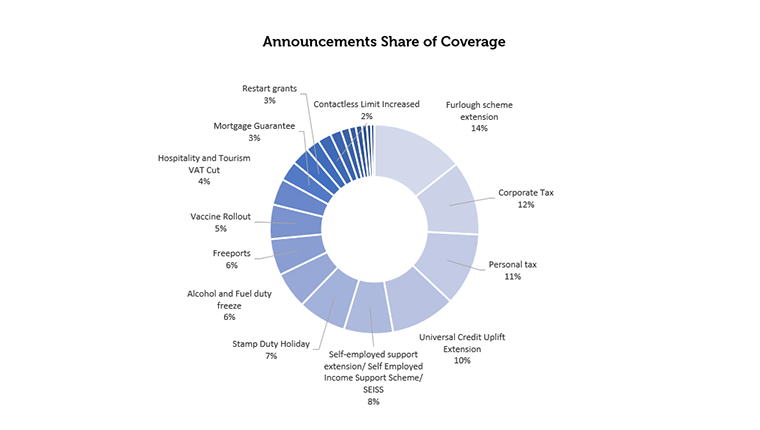 Of headlines that specifically mentioned one of the announcements, the Universal Credit Uplift Extension and the Stamp Duty Holiday fuelled most headlines. However 77% of headlines reported generally on the budget news. The sentiment of media that lead with the Universal Credit announcement was diverse, with the likes of the Daily Express reporting neutrally on the uplift over the next six months, while The Independent, alongside regionals such as the Daily Record, the Chronicle and the Northern Echo headlined that the Universal Credit ‘will be slashed’ later in the year and warned of families ‘plunging into poverty’ and the risk to people’s mental health. Those that lead with the Stamp Duty story discussed how the holiday could help homebuyers save money and create “generation buy”, but also warned of a “house buying rush” and a ‘rise in house prices’.

‘Rishi Sunak’s budget today was long awaited and much-leaked. As a result, his announcements weren’t exactly a surprise as far as the housing market was concerned and broadly-speaking appear to have been reasonably well-received, albeit with an amount of caution’ – Louisa Fletcher, Daily Express, 03.03.2021

Key Facts of the Study
• Vuelio’s Insight team analysed over 1,400 articles from 3 – 4 March from the top 25 national and regional newspapers in the UK.
• The analysis was a blend of the benefits of Vuelio’s automated tagging software, enriched with the analysis from our Insight team.
• A sample of coverage was manually analysed in depth in order to qualitatively analyse the news surrounding Rishi Sunak and the Budget announcement.

Amy Parry is the Insights Lead at Vuelio, specialising in media measurement and analysis.