You are here: Home / media analysis / Newspaper circulation not linked to Twitter share
Previous Back to all Next 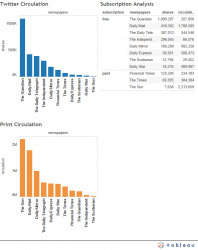 The Sun may have the highest print circulation among the national dailies in the UK, but on Twitter it ranks the lowest in terms of posts shared, according to a Vuelio analysis that compares the popularity of the 11 most widely circulated daily newspapers in the UK to the Twitter share values of their websites.

While the paywall on the The Sun’s website might explain the disparity in this case, the difference in The Guardian’s circulation ranked ninth in the UK, versus its Twitter share values which are the highest in the region, throws light on newspaper consumption patterns in the uptake of digital media.

The Independent showed a similar disparity as it emerges as the fourth most popular on Twitter even though it is the number 10 in the circulation index.

The Times and The Daily Mail however showed consistency in their readership in print and on the microblogging platform with ranks that were levelled on both platforms.

The circulation figures are based on the  Audit Bureau of Circulations (UK) figures while the Twitter share values are calculated from the beginning of this year till date using Vuelio’s social media index tools, and do not take into consideration weekend newspapers.