You are here: Home / Public Affairs / PMQs: Theresa May’s word cloud – 13 December 2017
Previous Back to all Next

At Prime Minister’s Questions Theresa May faced questions from MPs on the Brexit agreement being voted on in Parliament, homelessness, banks and domestic violence. We present the word cloud for Theresa May’s answers at PMQs on 13 December 2017. 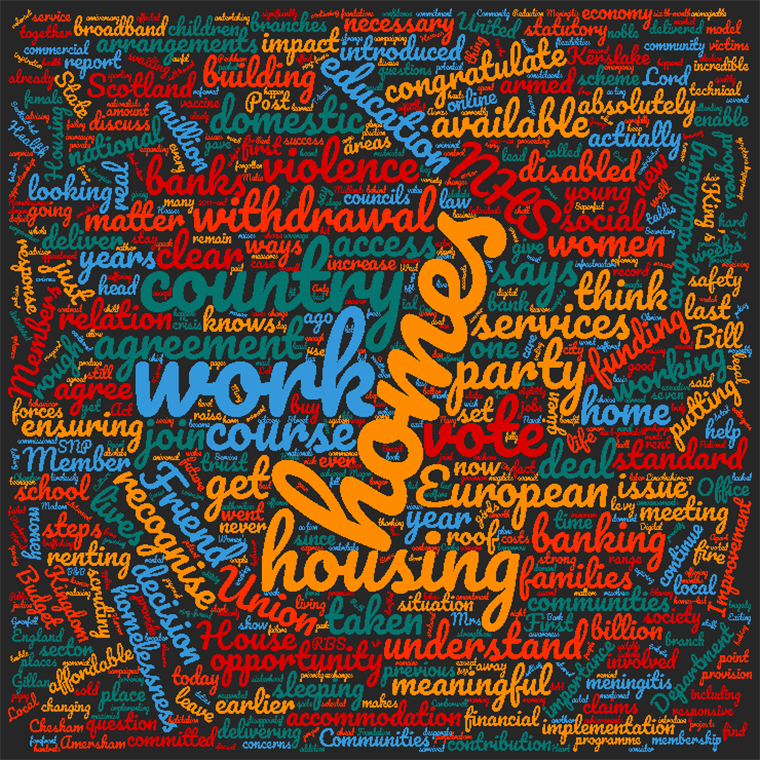 Brexit
Conservative MP Cheryl Gillan kicked things off by asking whether the Prime Minister would confirm that MPs would be able to vote on the final Brexit agreement. This has been the topic of much debate recently; Tory rebels are threatening to vote against the Government if it does not accept Dominic Grieve’s amendment to the Bill, which would make a vote legally binding. According to May, final withdrawal agreements will be put to a vote in both houses in Parliament, before March 2019, but with no mention of legalities.

Unity
Conservative MP Anna Soubry, began by calling herself and the Prime Minister proudly ‘difficult woman’, but asked, in the spirit of unity, for her to rethink her decision to reject Dominic Grieve’s aforementioned amendment. In a move that will not please rebels in her party, May stood firm on the matter, but said that there could be room for change before the amendment is voted on later today.

Homelessness
Corbyn and May began the session by coming to blows on homelessness. Corbyn pressed the Prime Minister on statistics that show 1 in 100 children in the UK are homeless, calling the situation a ‘national disgrace’. He also called for a firmer stance from the Government on short-term letting contracts to ensure families aren’t kicked out at short notice.

Banks
SNP Westminster leader Ian Blackford questioned the Prime Minister on RBS branch closures in the years since the bank was bailed out. According to Blackford, 259 branches have closed across the UK in the last year, and he asked May to step in and ensure the same does not happen with the remaining branches. Caroline Flint raised a similar point, calling on the Prime Minister to admit the Access to Banking protocol from the Government has failed.

Domestic violence
Labour MP Alex Norris quoted Woman’s Aid when questioning May on domestic violence. The charity has said that Government proposals for supported housing threaten the network of refuges which are in place to support domestic violence victims. May countered this by claiming that funding was and still is ring fenced, along with a variety of new laws designed to protect victims.