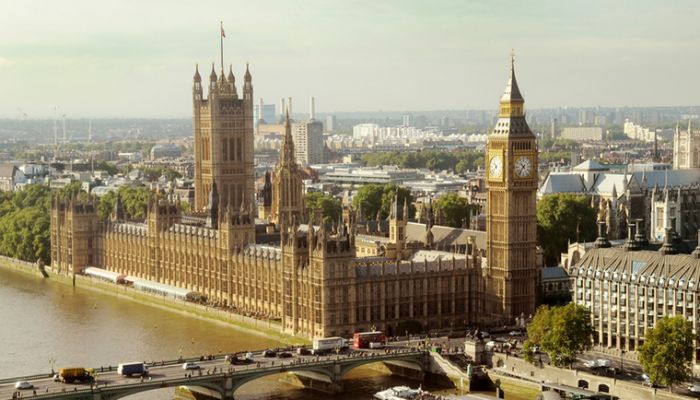 At Prime Minister’s Questions, Theresa May faced questions from MPs on the Carillion collapse, the NHS and the devolved powers. We present the word cloud for Theresa May’s answers at PMQs on 17 January 2018. 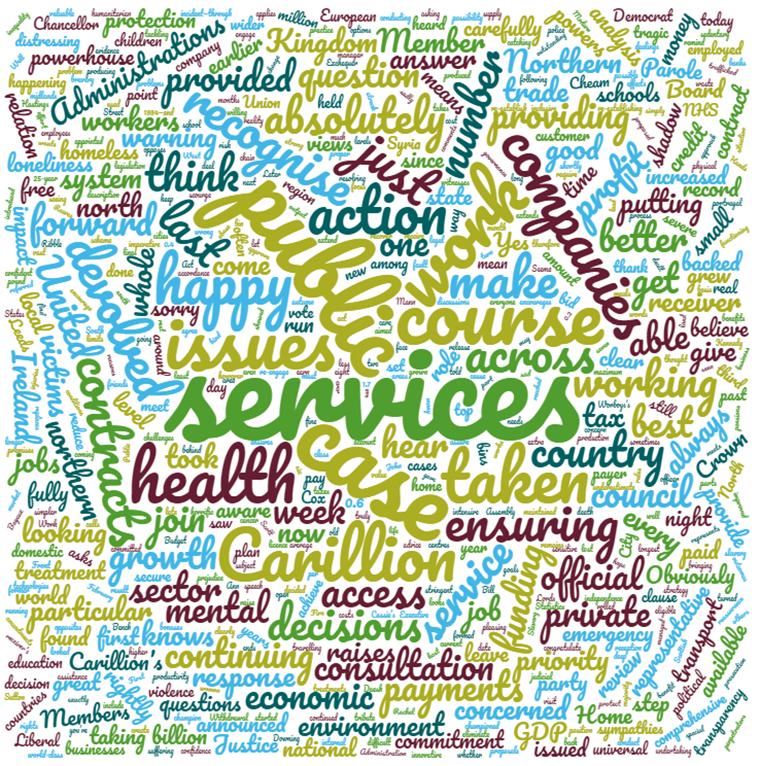 As expected, the Prime Minister was repeatedly questioned by Jeremy Corbyn on the Government’s handling of the collapse of Carillion. She assured the House that employees who are providing public services will be paid for the work they are providing and said the Government will help workers who are unemployed as a result.

After being blamed by Corbyn for not foreseeing the collapse, May said that the Government is a customer of Carillion, not its manager. She further argued that if the Government pulled out of contracts whenever a profit warning was issued, that would be the best way to ensure that companies failed, and jobs were lost.

May then stated that the Labour-run Welsh Government also awarded a contract to Carillion after the profit warning was issued and said a third of Government contracts with Carillion were let by the previous Labour administration.

The NHS
May was asked about the waiting times for NHS treatments after Nic Dakin MP cited a 52-week wait for pain treatment for one of his constituents. May explained that the Government is putting more money into the NHS and an extra £2.8bn was included in the budget. She said the Government wants to ensure all hospitals are world class and acting in accordance with best practice. Another MP asked about radiotherapy treatment under the NHS at a local level, with some patients having to travel far to receive their treatment.

May said the Government wants people to have access to these treatments and these decisions are to be taken at a local level. Additionally, May was asked about the lack of mental health beds, to which she admitted that there is ‘more to do’, but said that more people are able to access mental health services every day.

Devolved Powers
As the EU (Withdrawal) Bill reaches the remaining stages in the House of Commons today, SNP Westminster leader, Ian Blackford, accused the Prime Minister of not having a clue about the impact of Brexit. He said the Scottish Government has published research suggesting Scottish people will be worse off by £2,300 a year. May said that Scottish GDP grew 0.2% in the last quarter compared with 0.4% in the rest of the UK, arguing that Scotland is better off with a Conservative Government than an SNP one.

Plaid Cymru Westminster leader, Liz Saville Roberts, asked if May will support a bill in the Welsh assembly ensuring Westminster does not keep powers after Brexit that should be devolved, to which May said that an amendment will be introduced in the House of Lords to clause 11 of the EU Withdrawal Bill. She also said that she is committed to establishing a fully-functioning executive in Northern Ireland and called on all parties to re-engage in discussions.

Environment
In light of the Government’s 25-Year Environment Plan, published last week, May said she will encourage companies to follow what Iceland has done by eliminating all plastic packaging of own label products. May was also asked if she agreed that sustainable development needs to take into account the needs of the environment, to which May said it is possible to protect the environment and promote growth at the same time.