You are here: Home / PR Pulse / Social least trusted source for news
Previous Back to all Next 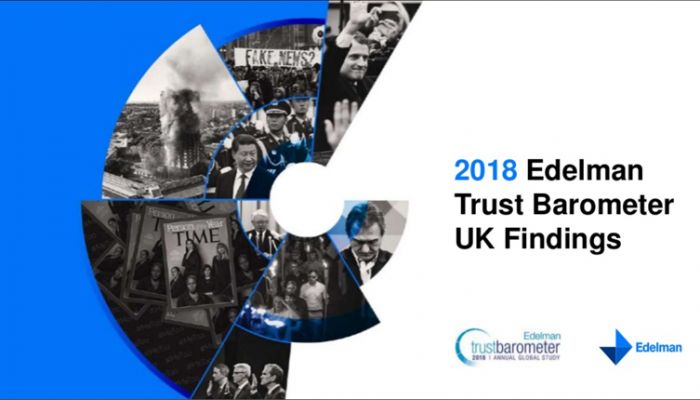 The 2018 Edelman Trust Barometer has revealed that trust in the UK’s establishment – NGOs, Business, Government and Media – has largely stagnated year on year. While overall trust in the media hasn’t budged, there are huge changes to be found when looking individually at traditional and ‘new’ media.

Trust in traditional media has seen a dramatic rise from 2017, and is now at its highest point since 2012. Conversely, social media has continued its yearly decline to retain the ‘least trusted’ position. 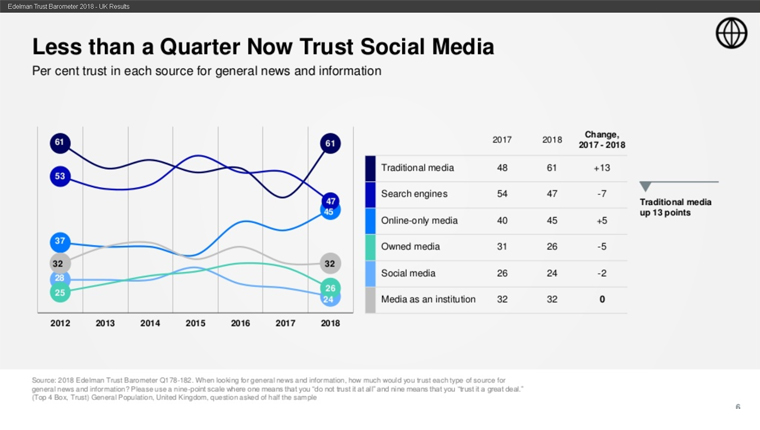 The report has followed weeks of announcements from Facebook chief Mark Zuckerberg, who is aiming to change the platform back into a ‘friends and families’ sharing space and away from a hotbed of ‘fake news’ and misinformation.

The lack of trust in social media as a news source (perhaps driven by the 42% who say they only skim headlines on platforms without reading stories, or the 64% who can’t tell good journalism from rumours or falsehoods) is only the beginning of the technology’s problems.

It may be easy to think that people are now seeking their news out in traditional formats, but worryingly the truth seems to be that the public is abandoning the news altogether. While 33% of are consuming less news, 19% are avoiding it altogether, citing the fact it’s ‘too depressing’ as the main reason.

Social media’s established role in increasing depression (see here, here and here) in users, and therefore society, can only be negatively contributing to people’s views that the news is too depressing.

As people switch off from the news, and the world around them, they become less informed and the establishments that should be held to account have more power and control to do as they please. The election and presidency of Donald Trump is one such example, the recent Presidents Club scandal is another*. This is highlighted in the Barometer, which has found the lowest level of ‘informed publics’ among the British Population.

Defined as being aged 25-64, university-educated, with a household income in the top quartile for their age in their country, reading or watching business/news media several times a week and following public policy, informed publics are now at just 6% of the population.

It is unclear how this age of apathy will end, but if you’re still reading, maybe there’s hope for us yet.

*Yes, the Presidents Club has now closed down thanks to the FT’s investigative reporting, but it has been running since 1985 with similar behaviours alleged each year. And though the meeting place has gone, have the behaviours? Who is holding these men to account?