You are here: Home / Q&A / Speedy Spotlight: The Red Ferret
Previous Back to all Next

The Red Ferret will be featured in this week’s Media Updates. Author Nigel Powell talks about trust, outstanding PR and being the longest-running tech blog in the world. 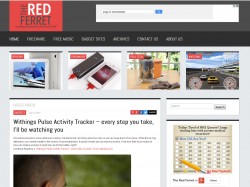 Why should people read your blog?
The Red Ferret delivers a mix of entertaining, irreverent and useful news, reviews and information on a wide range of tech topics. We are the longest-running tech blog in the world, and feature products, software and services you won’t find anywhere else on the web.

The most important issue in your blogosphere is… Trust. We see our job as acting on behalf of the reader to deliver trustworthy reports on technology we come across. We don’t regurgitate press releases, do paid for reviews or anything else that will compromise our independent, authoritative views.

What’s your favourite blog and why?
I’d have to say Gizmodo.com. Despite suffering the ups and downs of its volatile corporate background, this blog has managed to maintain its louche tone, while delivering some top notch technology news.

How often do you aim to post?
Every weekday we target between five and eight posts. Weekends are restful periods though, aren’t they?

How do you feel about guest posts?
We adore guest posts that are hilarious, insightful, powerful, authoritative and surprisingly newsworthy. Unfortunately, we haven’t come across any of those in 13 years of existence.

How does a good PR work with you?
A good PR keeps us informed of what’s interesting in the technology market. A great PR understands what makes The Red Ferret different and tries to deliver exactly the type of stuff we’re looking for. An outstanding PR lets us have this type of story before anyone else so we can break it to the world. We often tend to marry these PR people.

What do PRs do that’s bad?
A dodgy PR sends us emails about gardening implements. A sadly deluded PR sends us an email about a garden implement which won’t be on the market for a year, along with a mock up 3D computer-generated illustration. A really awful PR sends us an email letting us know that John Smith has recently been promoted to the position of Sales Manager for the Eastern Region of said garden implement company. We tend to send these PR people a box of gently ripening raspberries.

Editorial information on The Red Ferret, Nigel Powell and thousands of other media outlets and contacts can be found in the CisionPoint Media Database.

The only marketing you need is a good story