You are here: Home / media research / The Budget 2013: beer triumphs on social media
Previous Back to all Next

George Osborne has delivered his Budget for 2013. As this is one of the biggest news stories of any year, it was unsurprisingly trending across social media platforms. What was the conversation focusing on?

Using Cision Social Media, the most discussed points of the budget can be revealed. 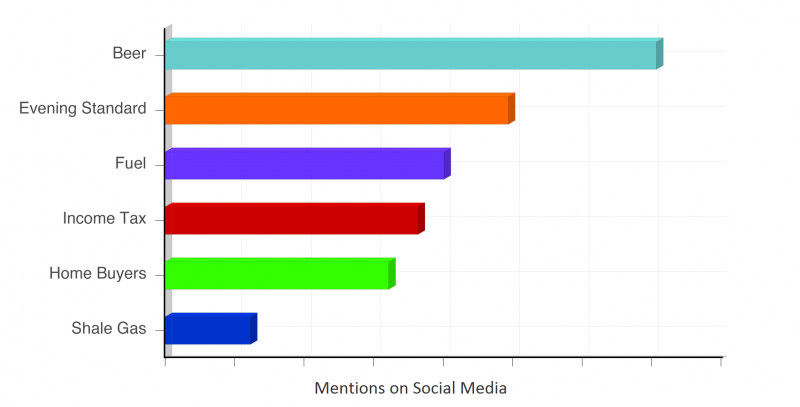 Whatever it says about the nation, the beer duty cut by 1p was the most discussed topic. Something that perhaps couldn’t be predicted was the London Evening Standard’s front page leak of the Budget’s details. As a serious, relevant story developing in real-time alongside the Budget, it naturally got picked up by the social media class.

The other main points also received fair coverage as many people take it upon themselves to tweet the facts of the Budget live. While it is useful to see what the main topics are, true understanding only comes with context.

Creating a conversation cloud, we can see the discussion about the Evening Standard’s leak develops throughout the story. 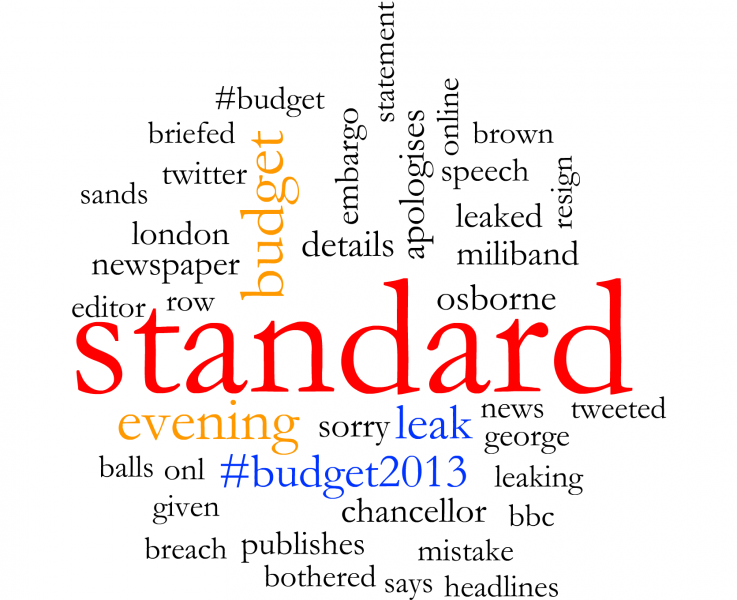 The words ‘publishes’, ‘leaked’ and ‘embargo’ gained traction as the leak first came to light. Then ‘balls’ joins the conversation as Ed Balls waves a copy in the House of Commons during the budget speech. Finally ‘statement’, ‘apologises’ and ‘sorry’ reveal the actions taken by the Evening Standard. It is unlikely this story will be dropped anytime soon, so expect further news to emerge soon.

The conversation cloud for the beer reveals a more typical conversation on a news topic. With Twitter acting as the main platform for people to discuss their views, the beer chat is limited to inclusions in summaries. 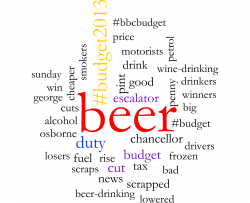 The cloud does have the words ‘good’, ‘cheaper’ and ‘lowered’, which all reflect well on the news from the Budget. Tweets comparing good news for beer drinkers and bad news for ‘wine-drinking’ or ‘smokers’, make up a large part of the conversation. As the topic received such a broad conversation, not many general terms arose as everyone will have their own take on the 1p reduction. However, a sentiment analysis reveals a 75% positive rating for beer-related Budget mentions.

While it is impossible to use social media to judge a nation’s opinions on this year’s Budget, the conversations are revealing about what parts of the speech stood out. This is a first-glance analysis; as the full details of the budget emerge and the Evening Standard story reaches a resolution the conversation is likely to shift. That’s the nature of social media though: stuck in the now.

The graphs and data came via Cision Social Media from CisionPoint.