You are here: Home / media analysis / Baroness Thatcher’s Funeral
Previous Back to all Next

Once again Margaret Thatcher has dominated social media and Twitter’s trending topics. Her funeral, which was held yesterday morning, was unsurprisingly the talking point of the day.

Described by many as a marmite figure (including the Guardian who created this advert), Baroness Thatcher’s funeral was always going to draw a crowd. The hashtag #thatcherfuneral was trending today alongside other related words – Cameron, Thatcher, Funeral, #London etc. At one point there were only two topics trending on Twitter – Thatcher’s funeral and Superman (The Huffington Post UK highlighted the unrelated trending topics).

But then the hour of the procession arrived and social media turned its collective attention to the event, clearly seen using Cision Social Media to measure mentions of funeral-related terms.

Most of these tweets will have been from people watching on television as phone signal along the procession route was non-existent. Sentiment is notoriously difficult to measure but positive and negative actions are not; using Cision Social Media we can measure the words ‘Booing’ (what those who opposed the funeral and Thatcher herself were doing) and ‘Clapping’ (The action employed by those that were showing respect and support for Thatcher).

While the booing attracted more attention, the tweets were made up of people condemning the booers:

I cannot fathom how anyone would turn up to a funeral to boo.A demonstrable example of moral decay.

People booing at the funeral should show some respect

At St Paul’s the clapping was deafening, which again suggests the conversation on Twitter was among people who were watching the television and not aware of the street-level atmosphere. 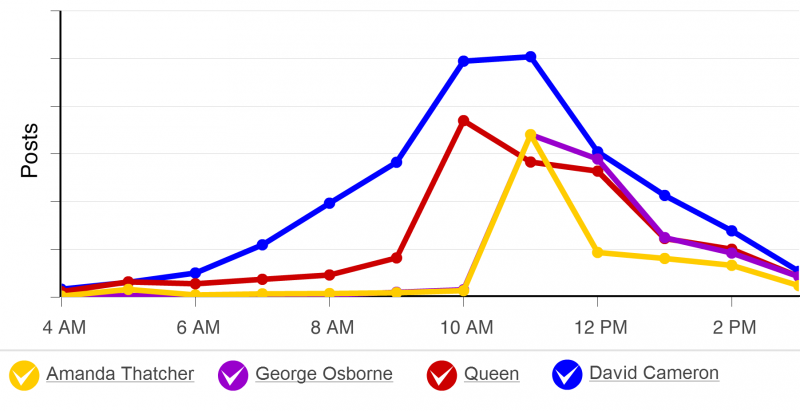 The biggest surprise was Amanda Thatcher, granddaughter of the late Margaret Thatcher. Now the feature of a fawning Mail Online article, Amanda is the ‘inadvertent star of the funeral’ according to the Guardian. The fact she prompted the same amount of tweets as George Osborne, who shed a tear at the funeral, shows how large the conversation around her was.

All graphs and charts made with Cision Social Media via CisionPoint.