You are here: Home / Politics / Budget 2021 Speculation: rebooting the economy and protecting jobs
Previous Back to all Next 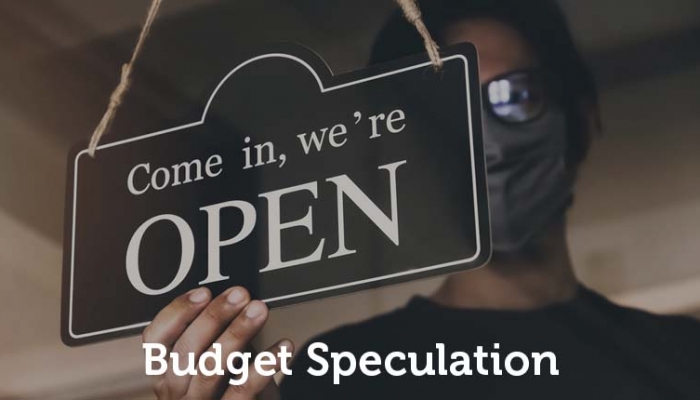 The economic outlook for 2021 is highly uncertain. Having started the new year with a renewed lockdown and an economy that shrank 9.9% in 2020, a stronger than expected vaccine roll-out offers hope for a recovery in the months ahead. The upcoming Budget on 3 March will be critical in terms of shaping the strength and nature of that recovery from this Covid-induced crisis.

The Chancellor has been under pressure to address two main issues: he has immediate decisions to make over many aspects of the emergency support packages that are due to expire soon, as well as a need to start looking at how to pay for the £394bn the UK is estimated to have borrowed in the past year.

Sunak warned that the Government could not ‘borrow our way out of any hole’. Speaking in the Commons after the third lockdown was announced, he warned that the public finances were ‘badly damaged and will need repair’. While the Chancellor has said that he wants to ‘balance the books’, the Government has also highlighted the ‘end to austerity’ for public spending. This suggests sizeable net tax rises will, at some point, be needed.

Many economists have warned the biggest risk to the economy in 2021 was that an ‘over-thrifty’ Chancellor would damage the recovery by tightening fiscal policy too early. According to analysis by the Institute for Fiscal Studies (IFS) and Citi Research, next month’s Budget should focus on securing the economic recovery from the Covid-19 pandemic, rather than trying to fix public finances. Similarly, former Chancellor Lord Darling has warned Rishi Sunak against ‘choking off’ the Covid recovery with higher taxes.

However, HM Treasury has announced it will publish a range of tax consultations three weeks after the Budget, a move some have suggested will allow the Government to announce a ‘good news’ agenda focusing on economic recovery while delaying decisions on potential tax rises until later in the year. Moreover, because of the slow path to reopening the economy announced on 22 February, it has been reported that the Chancellor has been forced to delay decisions on tax increases until he delivers a financial statement in the autumn.

It seems that Treasury officials are examining plans for major stimulus to the economy and are shelving plans for tax rises. Sources now say the Budget is likely to echo Sunak’s autumn ‘plan for jobs’ and be dominated by measures to protect jobs and shore up support for shuttered sectors.

Outside of fixing public finances, as already mentioned, the Chancellor has decisions to take on the support measures introduced in response to the pandemic, which are set to expire shortly. Many, including Paul Johnson at the IFS, have argued that these support measures should be extended for as long as restrictions are in place and phased out gradually as restrictions are phased out rather than coming to an abrupt halt. Budget decisions that need to be made include:

Alongside the existing measures, the Labour party suggested converting the Bounce Back Loans scheme into a ‘student-loan style’ arrangement, so that businesses only have to start repayments when they are making money. Labour also called for the establishment of a British Business Recovery Agency that would manage the Coronavirus Business Interruption Loans Scheme and Coronavirus Large Business Interruption Loan Scheme in order to create terms that secure the future of businesses, including employee ownership, preference shares and subordinated debt.

Labour also proposed the introduction of Covid recovery bonds which could raise billions of pounds for the National Infrastructure Bank and would give financial security to millions, many of whom have saved for the first time. Keir Starmer also explained how he would directly help to create 100,000 small businesses across the country over the next five years by boosting funding for start-up loans. Shadow Chancellor Anneliese Dodds also demanded U-turns on the council tax hike being forced on councils and the public sector pay freeze.

The Resolution Foundation said that Chancellor Rishi Sunak should combine a £30bn extension of emergency COVID-19 support with £70bn in additional stimulus. This should include a £9bn voucher scheme focused on supporting Britain’s high streets and retailers.

The Daily Mail suggested that Treasury officials are examining plans for major stimulus to the economy. This could include vouchers for high street shoppers and lower alcohol duty for restaurants and pubs, and perhaps a return of last summer’s Eat Out to Help Out.