You are here: Home / PR Pulse / Corbyn’s winning the social media general election
Previous Back to all Next 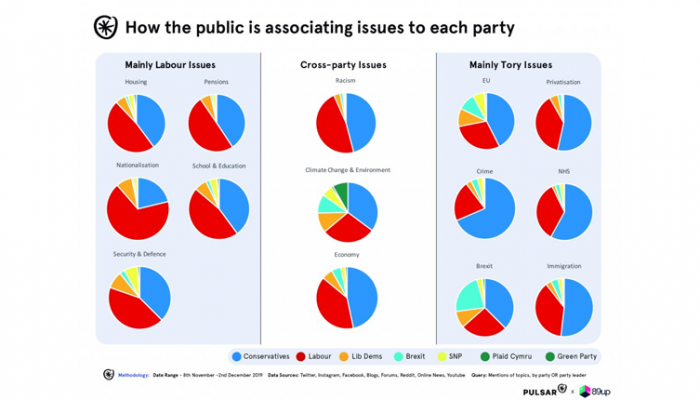 Vuelio’s sister company Pulsar has been tracking social media conversations across different platforms and highlighting the most popular policies, as well as the most engaging political parties and their leaders during the general election campaign. The influence of social media on campaigning is greater than ever, and this analysis shows who is finding success.

The Pulsar/89up social election index analysis of social media followers and content engagement across the main social networks and online sources reveals significantly higher volumes of engagement with content from Jeremy Corbyn in comparison to that from Boris Johnson. 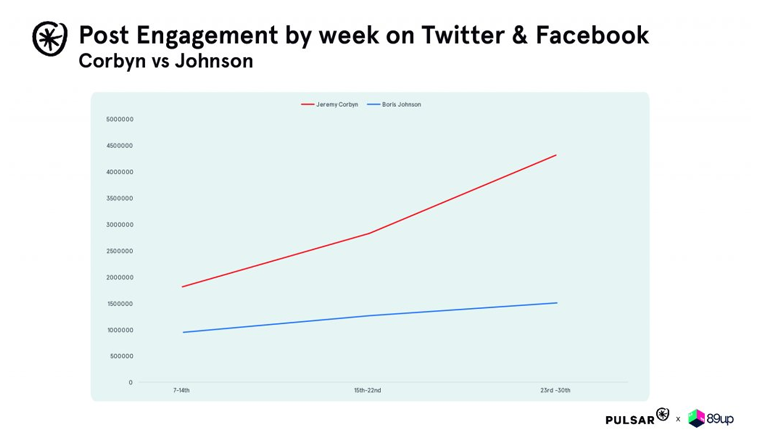 Corbyn is also picking up new followers at a much faster rate than Johnson, with both finding more success on Twitter over Facebook. 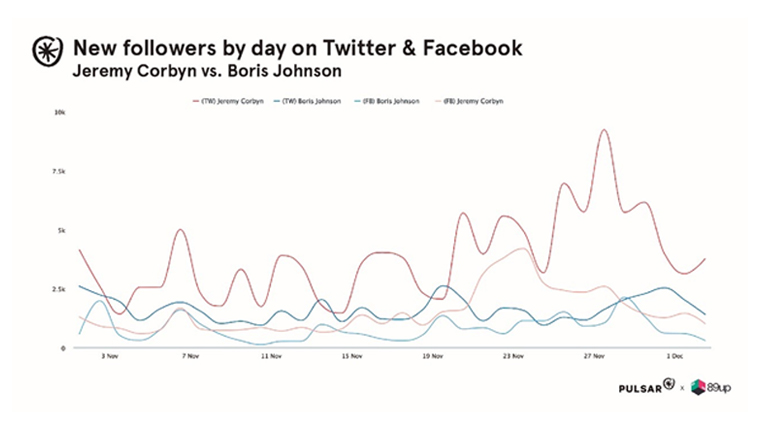 He had a major uplift in the number of his social media followers after his much-criticised interview with the BBC’s Andrew Neil on 26 November, as well as this tweet on 24 November, which was by far the most engaged with piece of content from the period we tracked.

Issues
The index also shows that people are developing and evolving their arguments on social media, with Brexit dominating the general election in terms of the volume of social media conversations, closely followed by the NHS.

The biggest surprise, compared with previous elections, is the dominance of Racism in the social media conversation, on par with the Economy in the discussion. This follows media coverage in recent weeks about anti-Semitism and Islamophobia largely affecting the two main parties. 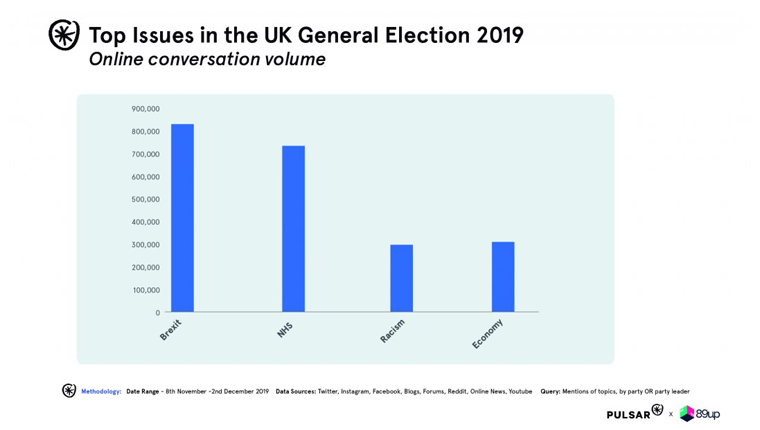 The comparatively low volume around Crime and Security and Defence, will presumably change in the final two weeks of the campaign leading up to polling day on 12 December, following the tragic terrorist incident in London on 29 November. It has already led to wider questions being asked about resourcing of the UK’s police and security services as well as the prison and probation service.

The breakdown of issues by party show which policy areas are cross-party in terms of the social media conversation and which are dominated by either Labour or the Conservatives.

The Lib Dems and the Brexit Party, who have polarised positions on Brexit, have their biggest share of the conversation around the EU, while the Green Party takes a larger share when it comes to Climate Change and the Environment as expected. Following media reports of the SNP’s position on Trident and the UK’s nuclear deterrent, it is unsurprising to see their highest share of the conversation is around Security and Defence.

Issues such as Housing, Pensions and Nationalisation see Labour dominate the social media conservation, whereas Privatisation, Crime and Immigration are dominated by the Conservatives. 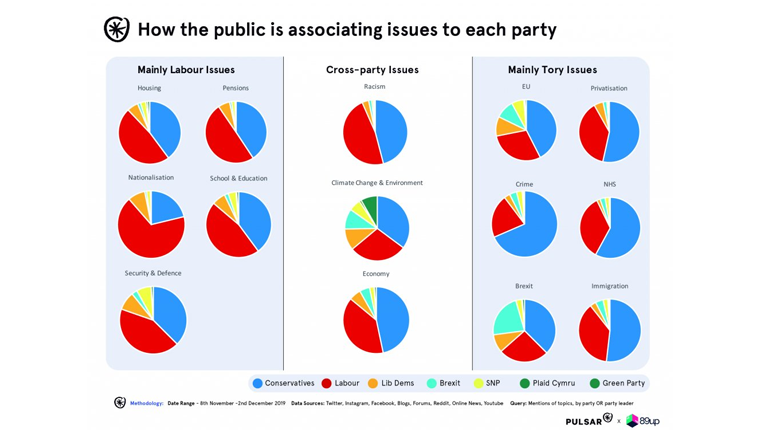 The index is noteworthy given the amount of influence social media is expected to have on the final two weeks of the campaign and the eventual outcome, which is reflected in widely reported party spend on social media advertising. Whether Labour can convert its social media success into votes remains to be seen, but this tracker will give an indication of the public’s behaviour online right up until 12 December.

The party with the greatest social media influence will also have an advantage on election day itself in terms of ensuring members and supporters are amplifying the party’s ‘Get out the vote’ messages and are also directed to the most critical target seats.

The social media analysis in the Pulsar/89up social election index offers insight into the general election campaign across social networks and other web sources, such as Blogs, Forums, Reddit, Online News and YouTube from the 8 November to 2 December. The report tracks mentions of key political issues and UK political parties and their leaders.

Kelly Scott is the Head of Political and Stakeholder Strategy at Vuelio.