You are here: Home / PR Pulse / Crisis Comms webinar: People should be at the heart of your crisis communications...
Previous Back to all Next 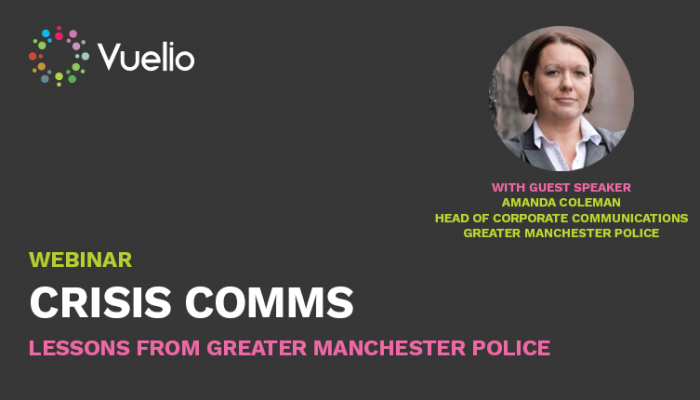 People – and their welfare – should be at the heart of your thinking when reacting in a communications crisis says Amanda Coleman, the head of corporate communications at Greater Manchester Police.

Ultimately, if you consider your actions and the impact they have on people, then you are doing the best thing for your company, she told the audience of our recent webinar Crisis Comms – Lessons from Greater Manchester Police.


‘People have to be at the heart of what you are doing. Most importantly it is the people affected – by the incident – and the wider public. If you have people at the heart of your thinking, you are likely to make the right decisions,’ she stressed.

‘We talk a lot about the plan, processes and procedures – and they are important – but you have to have people at the heart of it all.’

Coleman, who has been in her role during some challenging times for Manchester – including the 22 May Manchester Arena terrorist attack last year – said the focus on people should include support for the comms teams working in a crisis.

Initially, as events unfolded after the attack last year, she explained that the comms team at Greater Manchester Police worked 12-hour shifts, were undertaking ‘draining and emotional jobs’ and needed to be supported too. They showed how resilient they were, she added.

She said that investigating the opportunities for further support from other police forces in the UK was part of her ongoing planning for the future.

In the webinar, Coleman set out the key principles of crisis communications and answered questions from the audience. Two key areas she covered were:

• Planning and preparation are essential for crisis communications but you have to be flexible if a crisis occurred. Lessons in communications were taken from other incidents in London, she said, but Manchester is unique and some things are done differently. ‘You can look at the risk areas but you have to have flexibility to adapt when you respond to a crisis,’ she explained.

• The importance of speed in your first response to breaking news. ‘When we had the Arena attack the speed of getting the first response out was crucial’, she said.

‘Crisis communications is such an important area and you do need to be ready for it’, Coleman added.

Thanks to Greater Manchester Police’s @amandacomms and @Vuelio for an insightful and interesting webinar on crisis communications this morning. Keep up the good work!

A recording of the webinar, together with copies of Amanda Coleman’s presentation, will be available next week.