You are here: Home / Public Affairs / PMQs: Theresa May’s word cloud – 6 December 2017
Previous Back to all Next

At Prime Minister’s Questions Theresa May faced questions from MPs on Brexit, Ireland, infrastructure and universal credit. We present the word cloud for Theresa May’s answers at PMQs on 6 December 2017. 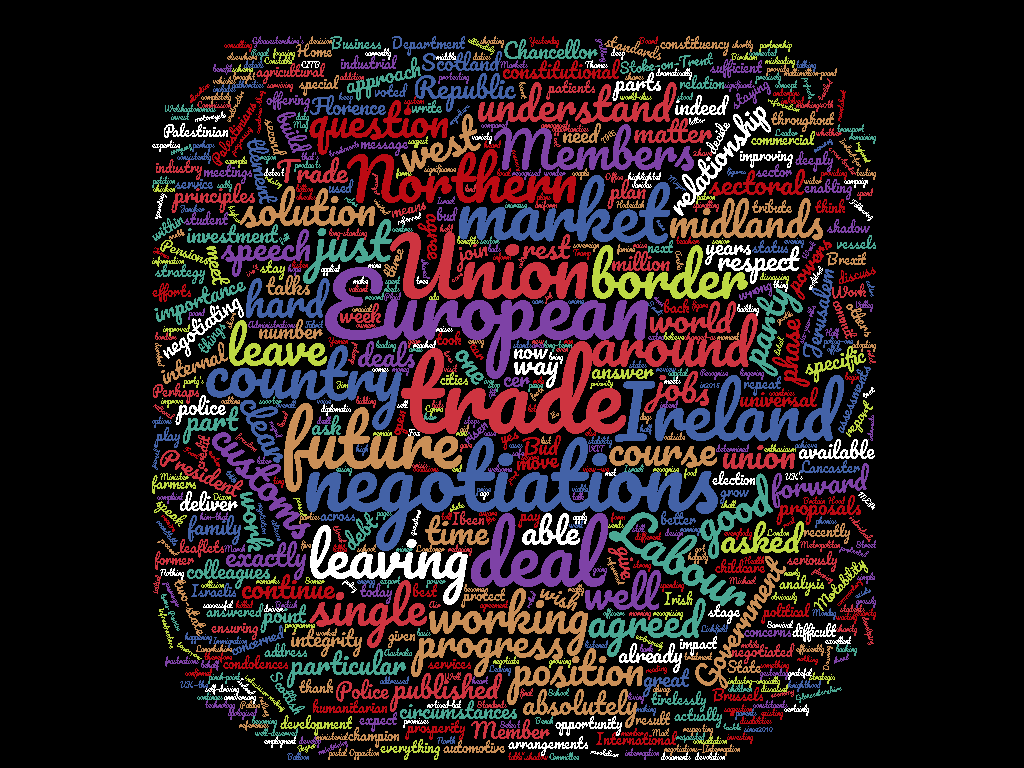 Brexit Negotiations
May was asked on numerous occasions for an update on talks with the EU. May said that the government is trying to ensure that it can build a country for the future and said it is on course to deliver. Brexit is a topic that Corbyn normally avoids at PMQs, but he picked up on comments made by Liam Fox that the Brexit talks will be the ‘easiest in human history’. She responded stating that very good progress has already been made.

Ireland
Corbyn described the Tory-DUP relationship as a ‘coalition of chaos’ and a ‘tail wagging dog’, claiming that the government forgot to share the details of its proposal on Ireland with the DUP. May said that no hard border between the Republic and Northern Ireland will be in place, protecting the integrity of the UK. She exposed the divisions within Labour on Brexit, saying that the only hard border is ‘right down the middle of the Labour Party’. SNP Westminster Leader, Ian Blackford, said the Conservatives gave the DUP a veto of Brexit. May said there will be particular circumstances for Northern Ireland, but all parts of the UK will be consulted to ensure the right deal for all.

Israel
In regards to recent comments made by President Trump about moving the US embassy from Tel Aviv to Jerusalem, Labour’s Ben Bradshaw raised suggested this would cause ‘grave damage’ to the prospects for a peace settlement. May says she is planning to speak to President Trump about the decision to move the US embassy. She also stressed, ‘we want to see negotiated settlement’ and a two-state solution, in which there is a ‘sovereign, viable Palestine’ and ‘a safe Israel’.

Universal Credit
Asked to ‘end the cruel requirement for people across the UK who don’t want to know they’re dying to self-certify on universal credit’, May said she’ll ask the work and pensions secretary to look at the issue. She also said the government is working on how universal credit is rolled out and how individual circumstances are dealt with.