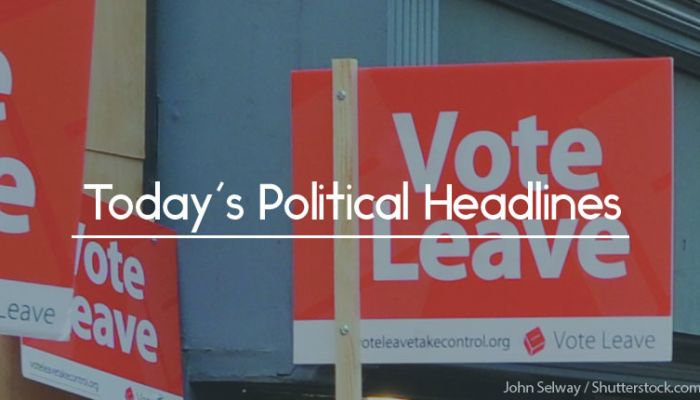 Vote Leave members may have committed criminal offences, lawyers say
The Guardian reports that lawyers advising the whistleblowers who worked for Vote Leave have said that members of the campaign may have committed criminal offences relating to overspending and collusion. The allegations will be debated in the Commons today, in an emergency debate secured by the Liberal Democrats. Yesterday, Theresa May defended her political secretary Stephen Parkinson, who faced criticism for outing a whistleblower as gay.

‘Safe spaces’ criticised by parliamentary report
According to The Times, a new report by the Joint Committee on Human Rights tells universities they cannot be ‘safe spaces’ and must allow unpopular and controversial voices to be heard. The committee, chaired by Harriet Harmon, described the concept of ‘safe spaces’ as ‘too broad or very vague’ and warned that they impinged free speech.

Stella Creasy attacks high cost credit cards
The Guardian reports that the Labour MP Stella Creasy, who it credits with forcing the Treasury to cap interest rates and fees from payday loan providers, is calling for similar action on high-cost credit cards in order to protect vulnerable consumers. She is backing an amendment to the Finance Bill today, which could lead to a limit if successful.

Simon Stevens says £4bn cash boost would bring back post war NHS
The Daily Telegraph reports that Sir Simon Stevens, the head of NHS England, has said that if Theresa May gave the NHS a £4bn cash boost to mark its seventieth birthday, it could return to being the ‘kind of health service we had for the post war period’. Also speaking to the Public Accounts Committee, Sir Andrew Dilnott, who conducted a review into social care, warned that the absence of a cap left pensioners ‘terrified’ about care costs.

Williamson condemns Russian use of Internet to spread propaganda
Gavin Williamson, the Defence Secretary, has spoken to The Times about Russia’s use of troll and robotic accounts online to spread propaganda, branding them the ‘Lord Haw-Haws of the modern era’ and saying that they must be confronted. As the BBC reports, the USA and over 20 other countries have followed the UK’s lead by expelling Russian diplomats.

UK threatens to cripple EU satellite programme
In an exclusive, The Sun claims that the UK will cripple the global coverage of the EU’s Galileo satellite programme if it is excluded from it. The UK is to threaten to turn off key infrastructure for the programme on the Falklands, Ascension Island and Diego Garcia.

The Political headlines are made by Vuelio political services team.