You are here: Home / social media marketing / Regulators on influencers
Previous Back to all Next 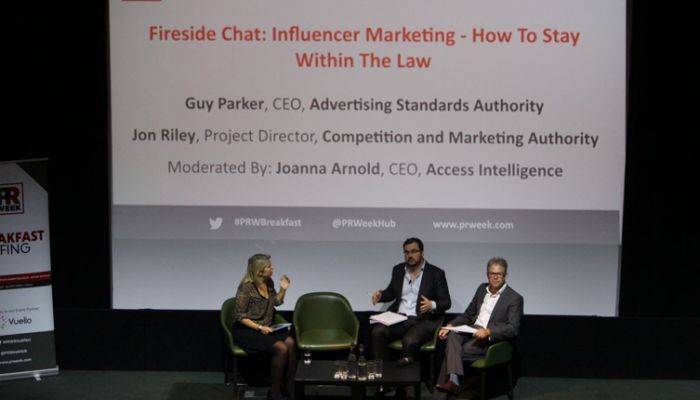 The ASA and CMA discuss blogging, brands and the rules of disclosure.

PRWeek’s Influencer Breakfast Briefing focused on brand and influencer collaborations, with a fireside chat between Guy Parker, CEO of the Advertising Standards Authority (ASA) and Jon Riley, project director at the Competition and Markets Authority (CMA), hosted by Vuelio’s own CEO, Joanna Arnold.

Both the CMA and ASA are responsible for policing marketing ethics in the UK; the CMA chiefly focused on enforcing consumer law and working on a macro level, the ASA leading on the administration of the UK Advertising Code on a day-to-day basis.

The organisations are primarily concerned with the labelling of advertising in the media, which includes blogs and social posts. There are two aspects of influencer collaboration to be aware of – a reciprocal arrangement, what we may think of as traditional advertising where payment or something of value is exchanged, and editorial control, where the brand has controlled content.

It is when these types of content are mislabelled or not labelled at all that the regulators can rule against the brands and bloggers in line with the CAP Code.

What happens when you’re in the wrong?
Guy gave an example of a ruling from this morning – Geordie Shore’s Sophie Kasaei’s post about the product Flat Tummy Tea. The post, misleading in both name and benefits, was ordered to be removed. This is the second time the product has been called out by the ASA, and Guy explained that cases of sustained non-compliance could be reported to the Office of Fair Trading to bring criminal charges.

Guy pointed out that putting #sp for an advert wasn’t sufficient, as advertising and sponsorship are fundamentally different things. Drawing parallels with broadcasting, sponsorship of a TV programme appears like an advert before the show begins but doesn’t lead viewers to think the sponsor has editorial control over the programme content.

The same applies to blogging and digital influence – if the content has, in any way, been paid for then it must clearly be labelled as an advert.

What about gifts?
Gifts are a murkier area, where ethics and the law don’t align. Guy likened it to ‘bad journalism’, where positive content has been secured in exchange for a gift. While there’s no current law against this, content creators and brands should be ethically wary of such content as, when the gifts reach a high value, they could be deemed to have a ‘corrupting effect’.

The CMA and ASA are fighting to raise awareness of these rules. No one can create a national broadcaster from their bedroom but the next big blog could be started without the author realising it’s a media outlet that must play by the same rules as everyone else.

Both organisations see themselves as playing catch-up with technology, but by design rather than through failings. Guy explained that the codes and rulings were reactive so as not to hamper innovation and advancement in any way. The language around blogging and social media influence is all new – it’s easy to see where adverts are on television, but the digital boundaries are still be created online and the ASA hopes to mould rather than create them.

The blogging industry is ethically aware and for the large part almost there. The Vuelio Bloggers Survey revealed 87% believe disclosure is important for all collaborations. What the CMA and ASA are hoping is that this majority will continue to promote best practice and put pressure on the 13%, calling them out when they’re in the wrong.

This model of self-policing might work for now, but in the long run a standardised authority for blogging would carry more weight, providing clear rules and support for bloggers of all shapes and sizes. Bloggers want to be trusted more than their traditional journalistic counterparts, and they’re in a unique position to learn from the mistakes of their forerunners and forge a clearer, more ethically sound, future.