You are here: Home / PR Pulse / The Mass Conflict Behind Gene-Edited Produce
Previous Back to all Next 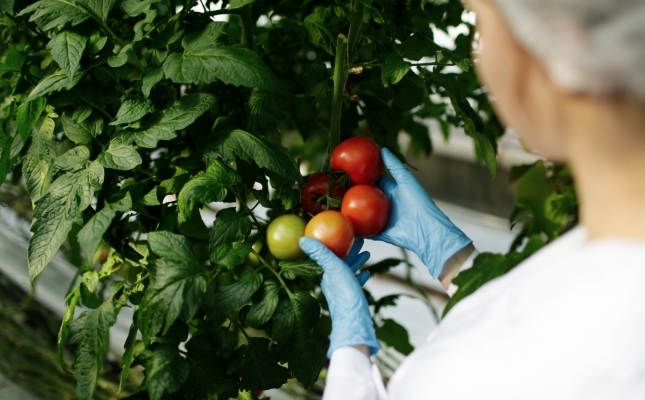 With firm support from George Eustice, the secretary of state for environment, food and rural affairs, scientists across the UK argue that these modifications to British produce would create significant benefits to our health, environment and food security. The decision has received strong criticism from the Scottish and Welsh governments, while the public has demonstrated concerns over the lack of labelling required when these products hit the shelves.

In July 2019, as part of his first speech as prime minister, Boris Johnson announced the goal to ‘liberate the UK’s extraordinary bioscience sector from anti genetic modification rules’ and ‘develop blight-resistant crops’ that will feed the world (Royal Society of Biology, 31.07.19). Officials and food scientists have clarified the difference between gene editing, which involves the manipulation of genes within a single species or genus, and genetic modification (GM), in which DNA from one species is introduced to another. Since November last year, 236 news sources reported this distinction within the body of their coverage, first published by the UK Food Council.

At the John Innes Centre in Norwich, specialists have taken huge steps towards this goal with the creation of the first gene-edited tomato. In this instance, the fruit was enhanced with Vitamin D, a nutrient that over 40% of Europeans are deficient in (Science Daily, 23.05.22). Similar developments are being made in other British foods, such as anti-carcinogenic wheat and pigs immune to swine flu.

Over the last 12 months, 2,306 gene-editing focused articles have been produced by print, media and online news sources across the UK. National coverage has seen significant growth over the past eight weeks, peaking in the final week of May:

As part of the initial research process, the fortified tomato case study received nationwide coverage as it evolved – the final stages of work and subsequent breakthrough were the highest source of volume over the last four months. The majority of this coverage was tied to print and online media until 10 May, which then saw a 309% upsurge in overall engagement due to a broadcasted mention of The Genetic Technology Bill in The Queen’s Speech. As the John Innes Centre also shared its final press release on 23 May, this was and will likely remain the highest performing month for volume + reach combined.

Between May 2021-2022, The John Innes Centre was mentioned 694 times in relation to its gene-editing research, with regular contributions and comments offered from the associated scientists throughout. Professor Cathie Martin, group leader, was the second-most-mentioned name after George Eustice.

Since 1 March, the ‘sped-up’ progression of The Genetic Technology Bill was a headline in 288 UK-based news sources, with Mail Online and Agriland.co.uk creating the most content on this area of the discussion. Heightened media exposure through The Queen’s Speech was the key reason behind this, while the gene-edited tomato breakthrough came in a close second.

Between March and June, 20% of all coverage focused on two overarching issues for the public. The first is the lack of labelling that will be required when gene-edited products hit the shelves of British supermarkets. This has prompted an outcry from some consumers who claim they ‘should be given a choice’ (Daily Mail, 27.05.22). Half of all label-related coverage had the term ‘frankenfoods’ in the headline, which started with an article by Mail Online and was syndicated a further 54 times by local and regional media until 5 June.

‘What has been removed is the need for an independent risk assessment and the need for transparency’ – Liz O’Neill, Director, GM Freeze

The other public issue is around the genetic modification of livestock. UK-based charities have also stepped into this discussion, with RSPCA leading the conversation. David Bowles, head of public affairs, was quoted by 21 national publications in calling the new legislation a ‘serious step back’ for animal welfare. In the RSPCA’s press release on 26 May, Bowles further argued that ‘there are potentially serious implications’ on both farm animals and people, stating we ‘simply do not know the long-term consequences’. Similarly, Kierra Box, of Friends of the Earth, believes gene-editing is genetic modification by a different name, that it ‘still focuses on altering the genetic code of plants and animals to deal with the problems caused by poor soils, the over-use of pesticides and intensive farming’ (The Guardian, 25.05.22).

Among the coverage that outlined potential issues with the bill, five were top national media outlets. The remaining 113 were regional and local news sources, science journals and agriculture websites.

As the war in Ukraine and global inflation evolves, concerns around food security have been a significant incentive behind ‘speeding-up’ The Genetic Technology Bill. The topic of shortages has been widely distributed across UK media, while 25% of all coverage was produced by The Telegraph.

Independent farmers across Scotland and Wales have held the strongest share of voice on this issue, warning that we are ‘sleep-walking’ into a full-on crisis (The Independent, 25.04.22). The Government has used this angle in the press to suggest that gene-edited food is a way to become less dependent on importation and therefore less vulnerable to restrictions made by Eastern European regions (Farmers Weekly, 24.05.22). Moreover, National Farmers Union Scotland president Martin Kennedy has agreed that precision breeding techniques could ‘deliver benefits for food, agriculture and climate change’ (The Telegraph, 27.05.22).

Despite food shortage concerns, the Welsh and Scottish governments have repeatedly stated their opposition to genetically modified produce. Scotland, which has hopes to return to the EU, has been keen to ‘maintain alignment’ with the same stringent controls on organisms which contain no additional genes or DNA (The Scotsman, 25.05.22).

Màiri McAllan, environment minister for Scotland, has called the UK Government’s decision ‘unacceptable’ and insists that Scotland would not make the same changes as England if the Bill passed (Inverness Courier, 11.06.22). 7% of all coverage over the past four months has discussed this conflict, with the leading headline: ‘Gene-editing Bill should not “force products on Scotland” says minister’ (The National, 11.06.22). This article, which wrote extensively of McAllan’s ethical and financial concerns, was repurposed 24 times throughout the beginning of June.

The Welsh opposition received less coverage, though it has been confirmed that UK ministers plan to try to persuade devolved counterparts to align on policy at a cross-government meeting at the Royal Welsh Show on 20 July (The Times, 14.06.22).

George Eustice has written to the Scottish and Welsh governments to urge them to reconsider their opposition to the technique, stating that by joining in taking forward this legislation, the UK would be able to ensure consistency in food regulation and the approach to the precision-bred organisms across the UK, upholding our priority of ensuring consumer safety’ (BBC, 24.05.22).

Professor Lord Trees, a cross-bench peer and former president of the Royal College of Veterinary Surgeons, was quoted 106 times since 1 March, in his warning that a failure to embrace more precise breeding technologies such as gene editing could be a ‘missed opportunity’ to deliver significant improvements in animal health and welfare.

A Need for Transparency

Both Eustice and the Government, supported by leading scientists around the UK, have made expansive efforts to change the gene-editing narrative in the media over the past 12 months. However, with a perceived lack of transparency on what genetically modified produce could look like for the consumer, public scepticism remains high.

In Scotland, a strong proportion of the farming population are in favour of the transition, whereas the environment minister remains firmly against the idea of a ‘forced’ legislation while trying to make amends with the EU. Similarly, leading climate activism and animal welfare non-profits have firmly expressed the unknown dangers behind making long-term modifications to the organic cycles of nature.

While local and regional media have remained closely in touch with ethical concerns by the public and opposing institutions, the positive aspects of gene-editing has been favourably represented by national online media. The first set of gene-edited produce is set to hit the shelves as early as next year, at which point both the Welsh and Scottish governments will have made their final decision on whether they are included in the first step towards the UK’s ‘extraordinary bioscience sector’.

As the war in Ukraine continues and inflation builds pressure on family support shelters, internal disagreements remain less of a concern to UK Government. Rather, food security is being treated as a priority and will continue to be a key motivator behind the swift progression of this change.