You are here: Home / social media marketing / Angry BA passenger buys tweets to complain
Previous Back to all Next 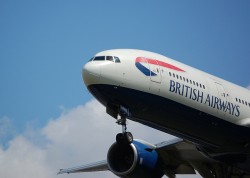 ‘If your goal is to drive a particular action via Twitter, Promoted Tweets are a great place to promote engaging content that includes a call to action to users.’

This is how Twitter defines its self-service advertising platform of Promoted Tweets, but it seems one user has taken the definition quite literally by buying the service only to launch a tirade of criticism and complaints against British Airways, the airline that lost his luggage.

Hasan Syed who goes by the Twitter handle @HVSVN is any brand’s PR nightmare as he continues to tweet posts and pictures mocking the airline’s service and efficiency, and vows to continue posting the ads until his bags are found and returned.

BA apologised this morning but Syed only belittled the airline further for not having a 24-hour social media support in place.

Syed, who is the president of Salon Commodities, a boutique manufacturer of personal care products in Illinois, America, is a perfect example of the new age customer, and the power of social media.

Here’s a quick look at what @HVSVN has paid to tweet:

@BritishAirways @British_Airways is the worst airline ever. Lost my luggage & can’t even track it down. Absolutely pathetic #britishairways

@rubigodi @BritishAirways @British_Airways Yes. I’m promoting my tweets to all BA followers since their Customer Service is horrendous.

@HVSVN Sorry for the delay in responding, our twitter feed is open 0900-1700 GMT. Please DM your baggage ref and we’ll look into this.

@British_Airways how does a billion dollar corp only have 9-5 social media support for a business that operates 24/7? DM me yourselves.