You are here: Home / PR Pulse / Centre for European Reform wins Prospect’s 2018 Think Tank of the...
Previous Back to all Next 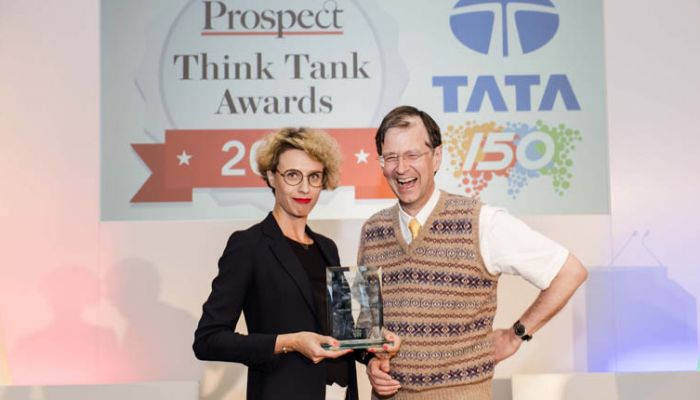 The Centre for European Reform took the main prize at Prospect‘s Think Tank awards this week as it won the Think Tank of the Year category [pictured]. The Igarapé Institute, a Brazilian Think Tank which examines security, justice and development challenges in Brazil, took home the One to Watch award, sponsored by Vuelio.

Other winners at the event, which was sponsored overall by Tata and held at the Institute of Directors in Central London on Tuesday, included the Joseph Rowntree Foundation, Policy Exchange, the Institute for Government and the Norwegian Fridtjof Nansen Institute (FNI).

Policy Exchange won best UK think tank in the Energy and Environment category, which was sponsored by Octopus Energy. The judges said its work paid ‘particular attention to the economic drivers behind effective environmental policies’ with research ranging from the role of future nuclear modular reactors to reducing vehicle emissions in Britain’s cities.

The Prospect Think Tank awards, which were founded in 2001, are an ‘annual recognition of the important and influential work carried out by Think Tanks across the globe.’

A full list of the 2018 winners can be found here.