You are here: Home / PR Pulse / Emergency Brexit: Predictions for the Comms Industry
Previous Back to all Next 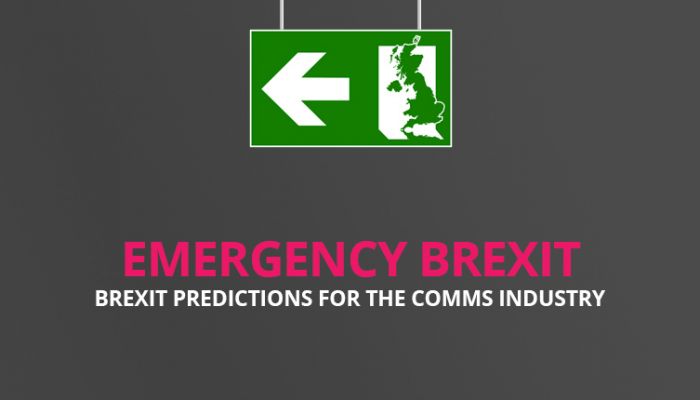 The UK is set to leave the EU on 29 March – that’s only 25 days away. Our next webinar will explore what these final weeks have in store for the comms industry and what’s coming next.

Emergency Brexit takes place at 11am on Tuesday 5 March. You can sign up to join us live, or receive the recording afterwards.

The webinar will hear from leading industry experts including Iain Anderson, executive chairman at full-service communications and market research agency Cicero Group, Matthew Elliott, who was chief executive of the Vote Leave campaign, and our host Lionel Zetter.

He previously led the successful NOtoAV campaign in the 2011 referendum on changing Britain’s voting system, and he also founded the TaxPayers’ Alliance and Business for Britain.

Iain is an expert in integrated communications, global political risk and public policy. He has over 25 years’ experience in communications, initially as a business journalist and then as a founding shareholder at Incisive Media. He has also worked for a range of politicians, including Kenneth Clarke MP on his leadership bids.

He is co-founder and executive chairman at Cicero Group and focuses on public policy and corporate communications strategy supporting many global FTSE and Fortune 500 blue chip organisations. He provides CEO and Board-level counsel.

Lionel is known across the industry and has written, spoken and taught widely on politics and public affairs. The former CIPR President is an expert in lobbying and will play host to our other esteemed guests.

The webinar will cover the comms aspects of the original Brexit referendum, the effect the result has had on communications and business over the last three years, how to prepare for Brexit and what the likely scenarios are over the next four weeks and beyond.

Everyone who signs up will have a chance to question our guests but if you’re unable to join us live you’ll receive a recording of the whole webinar afterwards.