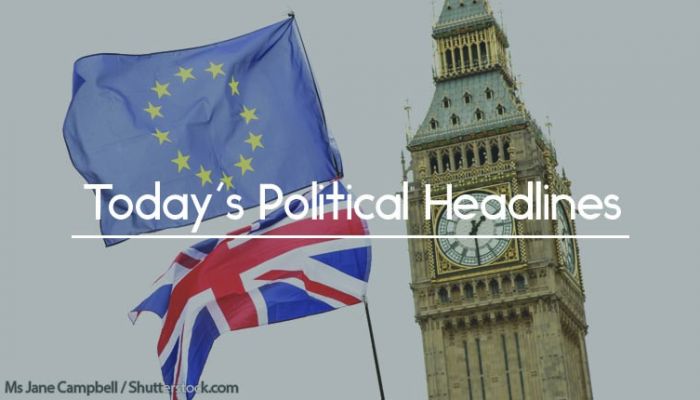 Today’s political headlines are still dominated by Brexit and are likely to remain that way, at least for the next 48 hours. The Government is hoping to agree the deal within the next two days – meanwhile, Boris Johnson has called for Cabinet mutiny and pro-EU MPs are preparing letters of no confidence in Theresa May.

Government hoping for a Brexit deal in the next 48 hours

The Times claims that the Government is hoping to agree a Brexit deal with the EU in the next 48 hours, with outstanding issues including fishing rights in the backstop and the review mechanism to leave it. Over the weekend, Andrea Leadsom said the UK must be able ‘to decide to leave’ the backstop rather than being ‘held against its will’ by the EU. The Financial Times adds that the EU is trying to get the UK to agree to the inclusion of detailed ‘level playing field’ measures in the backstop, including environmental targets and state aid rules to be overseen by the European Court of Justice.

Johnson to join MPs rebelling over gambling machine stake cut delay
According to The Sun, Boris Johnson is to lead a cross-party rebellion against delays to implementing a reduction to the maximum stake on fixed-odds betting terminals. An amendment, backed by 60 MPs, may be tabled by Iain Duncan Smith and Carolyn Harris  today. The Guardian adds that the Government’s decision to delay the policy was based on a report commissioned by the Association of British Bookmakers, which the company Paddy Power Betfair described as ‘unrealistic’.

Johnson calls for Cabinet ‘mutiny’ over Brexit
Writing in The Daily Telegraph, Boris Johnson says that Theresa May is ‘on the verge of total surrender’ to the EU, describing her Brexit plans as ‘shameful’. He adds that the Cabinet ‘ought’ to mutiny over the proposals, but that it would make little difference as the Government’s ambition ‘is to remain in captivity’.

Pro-EU MPs prepare letters of no confidence in May
The Sun asserts that pro-EU Conservative MPs are preparing letters of no confidence in the Prime Minister. One told the paper that ‘we are now staring into the abyss’ and another described Theresa May as ‘the problem’. One of the MPs suggested that David Davis might be persuaded to back a short-term Norway-style Brexit if given May’s job.

Retailers to pay more for recycling in new strategy
In an exclusive, The Guardian says that retailers and major drinks brands face a large increase in the amount they pay towards recycling used packaging, with contributions increasing from around £70m a year to between £500m and £1bn. The proposal forms part of the Government’s waste strategy, which will be published later this month.

Truss excluded from Budget meetings
The Times claims that Liz Truss, the Chief Secretary to the Treasury, was excluded from meetings before the Budget owing to tensions between her and the Chancellor, Philip Hammond, who was apparently annoyed by her attendance at Andrea Leadsom’s Brexiteer ‘pizza club’ meetings.

Hunt to confront Saudi Crown Prince
The Daily Telegraph says that Jeremy Hunt will today become the first minister to meet the Crown Prince of Saudi Arabia since the murder of Jamal Khashoggi. Hunt will use the opportunity to ‘confront’ Mohammed bin Salman, express his ‘horror and outrage’ and demand that the country co-operates with the Turkish investigation into the death.

Will a deal be made? Find out with Vuelio Political Services.