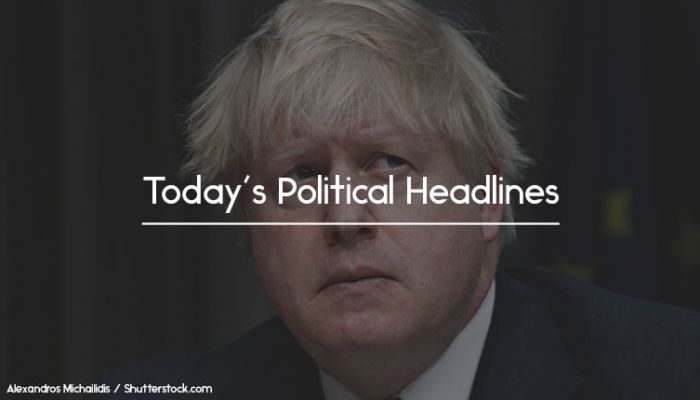 Today’s political headlines includes Boris ordered to court over Brexit campaign, review of post-18 education and funding published and Corbyn pledges Labour will back referendum on any Brexit deal.

Boris ordered to court over Brexit campaign
The Daily Mirror leads on Boris Johnson being ordered to appear in court over claims he lied during the EU referendum campaign. Johnson, who said the UK gave the EU £350m a week has been accused of misconduct in public office. His lawyers have called the private prosecution ‘politically motivated’ and ‘a stunt’.

Review of post-18 education and funding is published
The Daily Telegraph reports on the findings of the Augar review, a new report into further education. The review calls for the current cap on university tuition fees in England to be reduced from £9,250 to £7,500 a year. The paper claims May is aiming to create a ‘domestic legacy’, before she steps down in July, and says it is likely her successor will follow through with the plans, in the aim of winning over younger voters.

Corbyn pledges Labour will back referendum on any Brexit deal
The Guardian has published a story Jeremy Corbyn’s promise that Labour will back a second referendum on any Brexit deal put before Parliament. Corbyn, who is today on a visit to Dublin to meet with Irish taoiseach Leo Varadkar, said his party would ‘do whatever is necessary to stop a disastrous no-deal outcome’.

Esther McVey sets out her vision for leadership
The Daily Express has published an article written by Conservative leadership candidate Esther McVey on her vision for the UK. McVey says that a decade of police cuts has ‘broken’ the relationship between the Tories and police officers and that she wants funding for a new police covenant. She also says that more money needs to be spent on education.

EU market regulator scraps plans for no-deal block on UK stocks
The Financial Times reports that the European Securities and Markets Authority (ESMA) has dropped plans to prevent EU banks and investors from trading some of the UK’s largest listed companies in London in the event of a no-deal Brexit. ESMA had identified around more than 6,000 stocks, including Vodafone and BP, that EU investors would have to trade on European exchanges if the UK were to leave the single market without a deal.