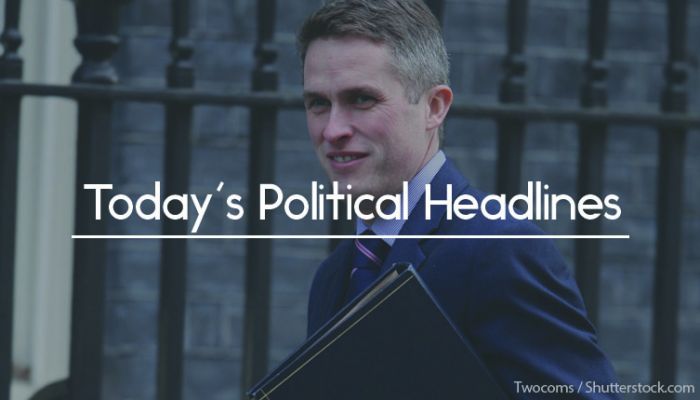 Williamson sacked over Huawei leak
The BBC reports on Gavin Williamson being sacked as Defence Secretary as he is suspected of being responsible for the Huawei leak, Williamson denies the allegations. Opposition MPs have called for an investigation into whether the Official Secrets Act has been breached. Williamson has since sworn on his children’s lives that he was not the source of the leak, and has blamed his poor relationship with the National Security Adviser for the decision.

Mordaunt appointed first female Defence Secretary
The Guardian reports on Williamson’s replacement, Penny Mordaunt who has become the first female Secretary of State for Defence. Her experience as a Royal Navy reservist and MP for Portsmouth saw her get the role. Mordaunt is a supporter of Brexit and has also been in the frame as a potential party leader when Theresa May leaves her post.

Johnson fighting Heathrow expansion
Boris Johnson has vowed to keep fighting the third runway at Heathrow as reported by The Sun. The claim comes after the High Court threw out a legal challenge over the construction of the runway, with Johnson saying this is not the end of the story. Johnson has concerns over increases in traffic, pollution and noise.

‘Catastrophic’ election losses may see PM forced out of Downing Street
The Daily Express reports that the Conservative Party could lose between 800 and 1,000 seats in today’s local elections, with Bow Group’s Ben Harris-Quincey suggesting that anything less could be spun as a reasonable night.

UK Parliament declares ‘climate emergency’
The BBC is reporting on the decision taken yesterday by MPs to declare a climate emergency. The declaration was one of the key demands put to the government by Extinction Rebellion, the environmental activist group, in a series of protests over recent weeks. The Welsh and Scottish governments have both already declared a climate emergency, along with dozens of towns and cities, including Manchester and London.

Vuelio Political Services clients didn’t have to wait for the morning headlines to find out Williamson was sacked.