The violent crime crisis and Brexit’s impact on the Good Friday Agreement dominated both Andrew Marr and Niall Paterson’s Sunday shows this week.

On the Marr Show, when talking about the significant rise in knife crime, Julia Hartley Brewer described it as ‘black on black’ crime and said that schools and family breakdowns had a role to play. Journalist Polly Toynbee accused stop and search of creating resentment that strengthened gang culture as well as anti-social and anti-police attitudes.

Secretary of State for Education Angela Rayner called for evidence-based, targeted stop and search. She said that this could be achieved through the presence of community and youth workers, who would be able to recognise which young people are vulnerable or at risk of getting involved in gang activity.

Secretary of State for Communities and Local Government Sajid Javid spoke of the Serious Violence Strategy to be announced by the Home Secretary on Monday 9 April. He revealed that the strategy would focus on root causes and early intervention. Javid also spoke of the upcoming Serious Weapons Bill which would introduce measures such as making it illegal for under 18s to buy acid and for individuals to possess certain weapons, such as knuckle dusters and zombie knives. Javid claimed the evidence proved that the significant rise in violent crime was not due to the decrease in police numbers. He said that the Government would nevertheless be increasing the police budget by £450m in the coming year.

Paterson guest, Shadow Policing Minister Louise Haigh, welcomed the new measures, however, she criticised the absence of preventative measures. She claimed that taking action on the criminal side was not enough to solve the problem.

Also on Paterson, Stafford Scott, Tottenham community activist, said that the problem lay not just with the police but also with local authorities, central government and the Mayor’s Office who, according to him, ‘have all reneged on their responsibility to these young people’. Minister at the Home Office, Victoria Atkins, spoke of the dangerous impact social media can play in influencing young people to get involved in gangs.

George Mitchell, former US special envoy to Northern Ireland, urged the Government to recognise that it is ‘the futures of their economies [at stake], it is the possibility of resumption of conflict, of a reversion back to the time that nobody wants to go back to except for a very tiny fringe element on both sides.’

Adrian O’Neill, Irish ambassador to London, made an appearance on both Marr and Paterson. He spoke of the ‘indispensability’ of the Good Friday Agreement, referring to it as ‘a miracle’.

On the Marr Show, Christopher Wylie spoke about the Cambridge Analytica story and a potential re-run of the EU referendum. He stated that ‘we need absolute clarity that the decision made by the British people was made fairly and compliant with the law’. He argued that if that was not the case, then a second referendum was required. 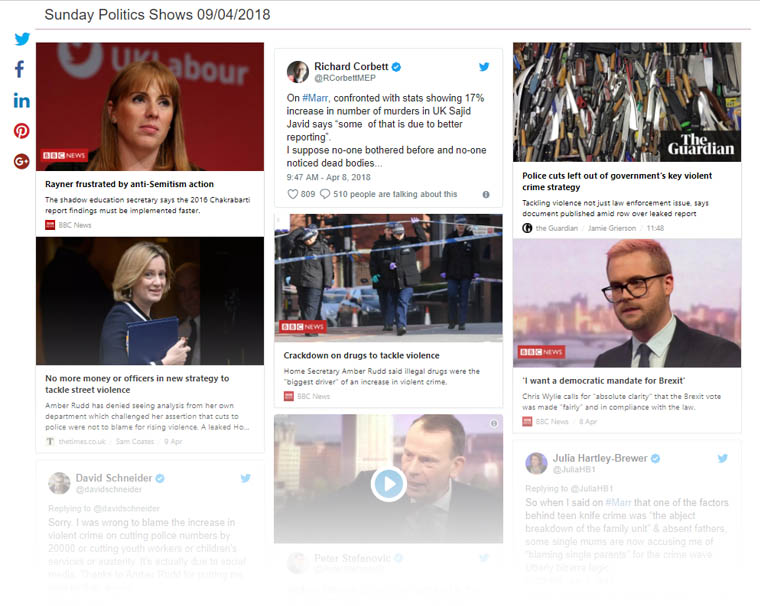