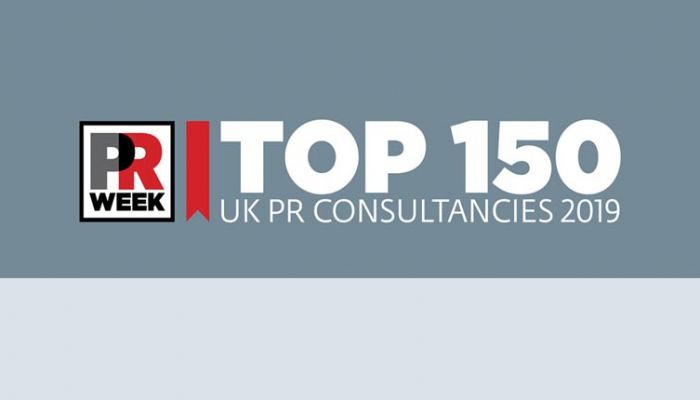 ING has jumped straight in at 87 in our debut entry into the annual @prweekuknews ranking of the UK’s Top 150 #PR consultancies, published today https://t.co/PG2hbbbhcm

Proud of the work we do @Lansonslatest still in top 30 PR consultancies. Because #reputationmatters #leadership https://t.co/4BJycEIU2s

Madano is up five places to 67 in PR Week’s ranking of the top 150 consultancies in the UK. Big thanks to all our team members and clients helping to power our growth! #PR #comms #publicaffairs https://t.co/QPQXpgfWtq

…but will no doubt be back for 2020 to claim their places. Because growth is one of the big takeaways from this year’s list, despite industry woes including GDPR and the efficacy of social media. It’s been a difficult year for PRs, but one the industry rose to, with expansion in staff counts, and growth in revenue – the total for 2017’s list was £1.26bn. This year? £1.32bn.

The top slots are unchanged with the biggest players – Edelman, Weber Shandwick and Brunswick Group – still in first, second and third. The majority of the top 10 are very familiar; all but nine were in the top 10 last year, with only Havas PR conspicuous by its absence (Finsbury has moved up to take the spot).

Also familiar is the prominence of London-based agencies across this year’s swathe. But look at the new entries and you’ll find new bases, suggesting growth outside the capital – new locations include Hertfordshire (Sassy at 54), Winchester (BECG at 56), Manchester (Tangerine at 91), and Edinburgh (Stripe at 92).

The UK PR sector is on the up in 2019, with financial communication agencies enjoying a particularly successful period. Brunswick’s global deals, for example, were up 26.2% (according to the Mergermarket PR Advisors league table). A broader focus continues to bring success for the bigger agencies – Rachel Friend, chief executive of Weber Shandwick UK, attributes its growth to reach: ‘We are a very broad church; we are multi-disciplined, across B2B to corporate to consumer through to health. We probably flex a little bit more because we are full service.’

But flexing isn’t just for the top three – independents in the middle of the industry are able to adapt quickly to client demands, and make their way up the ladder.

‘Agencies that can come up with creative work […] are winning and we’re growing the market as a whole,’ said James Gordon-MacIntosh, co-founder of Hope&Glory, and he’s right – Hope&Glory rose five places this year, to 50.

Being able to revise and rework an approach or focus has been important for securing accounts over the last year, with competition furious in a climate of hesitancy from clients. Even a few industry giants felt the pinch – as PRWeek notes in its analysis of the figures, M&C Saatchi Public Relations saw its revenue and head count fall this year following its loss of two big accounts. Red Consultancy, Lansons and APCO Worldwide also faced a drop in revenue.

With agencies including Tulchan Communications (20), The Communications Store (21) and Exposure (26) hitting high in the line-up after being left out last year, this year’s results show that the landscape is open to change. Sure, the economy is uncertain and regulations are changing, but agencies across the UK are securing interesting work with their creativity and adaptability. And with all the change in this year’s list, who knows what agencies will be at the top in 2020.

What do the top agencies have in common? Access to the best products and tools, including the industry’s worst kept secret – the ResponseSource Journalist Enquiry Service.