You are here: Home / PR Pulse / Should you be cautious of the future?
Previous Back to all Next 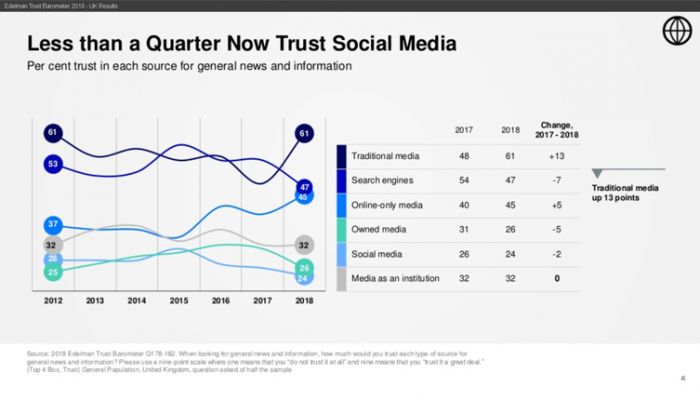 Edelman last week released their Trust Barometer for 2018. How should you be using this annual report to modify your media outreach?

The big news from the report was that trust in social media as a news source has continued to decline, while trust in traditional media has shot up.

As the chart shows, both owned and social media are losing the public’s trust, which should be a huge concern for the PR industry. Too often, we’re forward focused, always looking to the next trend and latest technologies for our coverage and campaigns. This approach is flawed, and in a world of fake news, it’s more important than ever for your brand and clients’ stories to be seen in trusted sources.

The decline of trust in owned media is perhaps not surprising – if you’re in control of the content and output, it’s likely to focus on only ‘good news’. That said, there is obviously an opportunity here for brands to buck the trend, to be more honest and give more insight into their practices. If your brand makes a mistake or slips up, come clean, talk about what happened, why, what you’re doing to fix it and what you’ll do to ensure it doesn’t happen again.

Social media also lacks trust a news source, and as Facebook is now moving away from an external content model, targeting social will lose priority among many PRs. Your industry will play a big part in this though, if you’re in lifestyle or FMCG markets, then social and influence still have a huge part to play in your success.

Switching back to traditional?
I think we’re all over the ‘print is dead’ myth, and for smart PRs, they never let traditional media slip from their outreach strategies. With a huge spike in trust in traditional media and their online counterparts, news publishers should still be top priority for your releases and campaigns.

Relationships with journalists are as important as they’ve ever been, as the public seek out trustworthy journalism and stories from reliable publishers. The Vuelio Media Database lists thousands of top journalists and is a great place to start.

Think positive
Another concerning stat that came from Edelman’s Trust Barometer is the rise in people now avoiding the news altogether. Some 19% are ‘switching off’, which means one in five people – who could be your potential audience – are unreachable.

The main reason they’ve given for switching off is that the news is ‘too depressing’, and with recent world events that’s hard to argue with. Again, there’s an opportunity here for brands and agencies to create positive stories and pieces to help reengage this huge proportion of the population.

How much do you consider trust when you’re working on your media outreach? Let us know on Twitter.