Is it a bird? Is it a plane? No, it’s a social media analysis. The Superman reboot Man of Steel is in cinemas today, so if you’re lucky you’re reading this on your smartphone waiting for it to start. The latest incarnation has Briton Henry Cavill donning the red cape surrounded by product placements from the production’s 100+ global promotional partners.

Using Cision Social Media we can see that the buzz around Man of Steel has been fairly consistent over the last month, but in the last few days the chatter has reached fever pitch. The conversation today has almost overtaken yesterday’s, with plenty more tweets still expected.

The peak on the 22 May came one day after a new trailer was released by Warner Brothers, which has since had 9.6m YouTube views. The most popular tweet was from Maroon 5’s frontman Adam Levine:

The tag line for the new superman should be “let’s try this ooooooonnnne moooooooooore tiiiiiiimmmmmme!!!”

The film has apparently managed to claw back $170m of its $225m production budget without a single person seeing the film. With such an iconic brand to work with, Warner Brothers are doing their best to cash in on it. But how are the sponsors faring?

Searching for social media mentions of the official promotional partners (as listed on Warner Brothers’ Man of Steel website) in connection to Man of Steel keywords, we can paint a picture of the companies who are benefitting from the build-up: 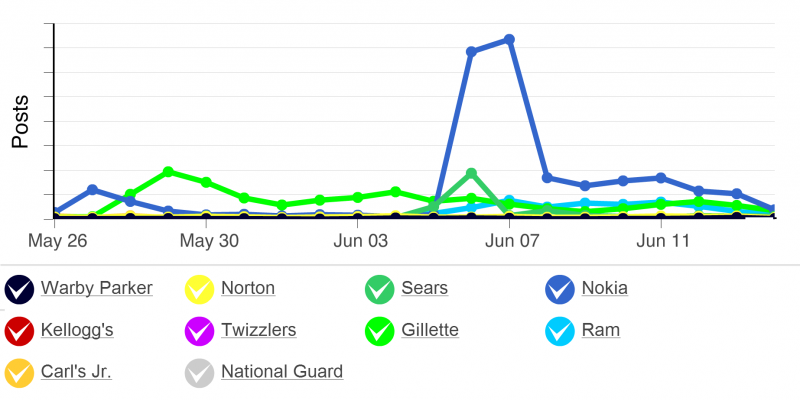 Nokia are doing the best of the early promoters with almost twice the amount of social media mentions as second-place Gillette. The peak on 6 June is thanks to the release of an exclusive trailer which is embedded on their website surrounded by product information. The video itself features the new Nokia Lumia 925, the Nokia logo on the opening title card and the Nokia logo in the bottom right throughout the other title cards:

Gillette has thrown itself into the social media mix by posing the intriguing question: ‘How does the Man of Steel shave?’ With a dedicated branded YouTube Channel and nearly two million views, Gillette has done very well to connect its own products directly with the content of the film.

The Sears peak on the 6 June was a clever PR stunt that seems to have proved successful on the day it took place. World records always seem to make good PR and Sears’ most people dressed as Superman in one place was no different. Using its own building to host the record is a shrewd move that will cement Sears’ connection with the Superman brand up until the record is broken.

We broke the world record today for the most people dressed as Superman in one place! #MANOFSTEEL #ThisIsSuper pic.twitter.com/1cLRBd9etb

While the other companies haven’t managed to provoke social conversation in relation to the film in the same way, association with a film that is expected to be as big as this is, should bring big benefits after people have seen the film. Warby Parker, for example, have Superman-inspired glasses, modelled on Superman’s alter ego Clark Kent’s iconic style – something people will only appreciate after seeing the film.

With a film that’s been the catalyst for over 1.5m social mentions in the last week alone, the box office forecasts for the opening weekend may be set too low. A lot of expectation rests on the shoulders of Kal-El, so it’s lucky for Warner Brothers that he’s a super man.